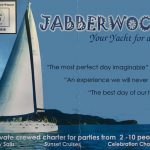 Tuesday and the day I’ve been waiting for has arrived at last.  Today the four of us have chartered a private yacht with skipper and we can’t wait. 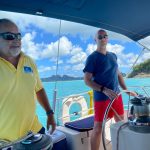 Lee and Nick at the controls

Harbour for 1000am and goodness knows what the morning traffic will be like so we took the precaution of leaving early.  Anyway, the run over to Jolly was clear so as we were early, this allowed our guests to have a wander around and look at the boats in the marina.

We were Collected on the dot of 1000am and we headed to our vessel for the day; a Benateau 50, skippered by Nick and his mate (wife) Kay and we left the harbour.  Whilst heading out we scanned all the boats at anchor for the one we looked at and liked but unfortunately it was nowhere to be seen.  Oh well never mind It’ll be back, hopefully!!!!  Into the open sea, up went all the sails, engine off and we headed south, what could be better so broke out the beer; 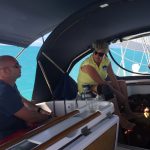 Fortunately this is not a dry boat!!!  The sea was clam and the wind light but we were sailing and that was the main thing.   Lee and Sarah hadn’t sailed before so they were enjoying their experience though Sarah had the foresight to take a sea sick pill before setting off.  Lee took the helm at one point an steered the boat superbly well following the coast line but inside the reef and for a few minutes we were healing over nicely, real sailing!!!!! 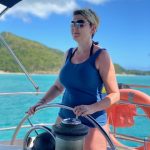 We finally arrived outside Carlisle Bay and dropped the anchor before we all got into the clear, calm, warm blue sea where snorkelling was the order of the day.

Our Skipper was a retired Solicitor from Warwickshire who had come to Antigua 14-years ago and took over this private charter firm, well a boat!  That for him was the simplest and quickest way to get the necessary papers to operate a charter boat.  His wife used to be in “high-end” retail but now was Nick’s “mate” and “cook” and 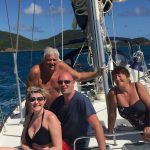 “deckhand” and “relief helmsman” if he needs a break, but it works, they are a very good and efficient operating team.

Anyway, after our swim and back on board Kay produced a wonderful lunch; Wahoo on a homemade salsa with lemongrass mayonnaise and salad, followed by fresh fruit and Brownies all washed down with 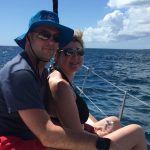 Relaxing in the sun

buckets of delightful wine.   It’s amazing what can be produced from a small galley.

After some more swimming etc., we lifted the anchor and headed back north.  This time we only put out the jib but there was sufficient wind to keep us going and Sarah then took the helm during which time I enjoyed their “own version” of a rum punch, and it was very nice so I had a 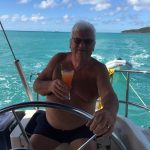 We eventually pulled back into Jolly Harbour, moored up and said our goodbyes.   What a wonderful day we all had, our hosts were attentive, the skipper was informative both about the seas around the Island and the goings on in Antigua.

Leaving the boat we popped into the “Crows Nest,” a waterfront bar and restaurant where it was happy hour, 2-drinks for the price of one 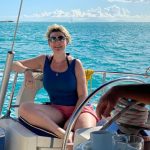 and Pina Coladas were the choice three of us went for.  They went down so well we did two rounds, 4-Pina Coladas each, unfortunately I had forgotten I had been supping all day on the boat including 2-very strong rum punches, all I will say is, Christine had to drive back!!!!!   We collected a KFC on the way home and soon after dinner I went to bed, whilst the others stayed up and played crib. 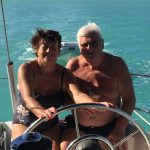