Up fairly early this morning due to there being some sort of commotion in the corridor outside our room which woke us up, well Christine actually, I didn’t hear anything, but once awake, tea pops into her mind!!! Still the bonus of being a little earlier than normal, we had the pick of the tables.

Our two objectives today were to organise a tour and to find a doctor.

Organising a tour was painfully easy as the tour operator has their office on the other side of the block of flats in front of us so we were there a few minutes after leaving the hotel. After looking at what’s available we plumped for a full day tour taking in the important sites and providing a Brazilian bar-b-q at lunchtime. The good news is we are picked up from the hotel at 8.50.

After a quick pit stop at our hotel, we strolled the 4 blocks inland to find the walk-in clinic where we were processed, and booked into their system very quickly and efficiently. That’s when it ended, as we joined a number of locals also waiting to see the doctor. Still about an hour later we were ushered into the “room” where we tried in our poorest Portuguese and his equally poor English explain what the issue was and what had already happened to Christine. Anyway after the stethoscope was used and he prodded her about and asked questions that we had to guess what they were, then answer them, hoping he understood, he gave her a 2-item prescription; strong antibiotics and something for her sinus and after collecting them we marched straight into a coffee shop for a snack as she should only take the strong antibiotic’s after food.

Back at the hotel and just as she was about to open the package, she noticed the Chemist had given her 500mg but the prescription called for 750mg, so we traipsed back to the chemist to correct things. Anyway we got back to the hotel, she took her first dose, and now we are hoping for a miracle.

The afternoon was much about chilling, getting up to date with “Oldies on Tour” getting some printing done and generally chilling, giving those antibiotic’s time to work. 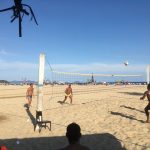 Present from Rio for the girls this time!

We strolled over to the beach seafood restaurant again and whilst eating watched a Brazilian version of Beach Volleyball; very interesting though I suspect Christine was captivated by the bronze coloured bodies, of the men with bristling biceps and Six packs; still she walked back with me!!! 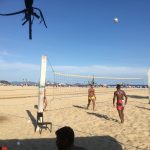 We decided to watch a film “What we did on Holiday” but there was insufficient volume on the edition that was on YouTube; probably a pirate copy.

Have to be up early tomorrow, tour day around Rio, hooray!!!