Queen Victoria and a couple of ports off call

Having managed to get the pickup time changed, we were determined not to keep the driver waiting, so were all breakfasted, packed up, and waiting in the lobby by 0945.

The driver arrived as arranged at 1000hrs, loaded and on our way soon after but still a tiny weeny apprehensive about going to the correct port, though we were re-assured through Harry this was correct. Our driver had his 15-year old son with him who, still on his summer holidays accompanied his Father. He spoke excellent English and was very chatty. His ambition after leaving full time education is to become a lawyer and like Spain, to enter that profession he has to have good grades all through his school career.   With a stop for fuel, the journey took a little over 1½-hrs and once we arrived in San Antonio and saw the red funnel of the Queen Victoria, we were very relieved.

We were deposited with our “very” heavy cases at the terminal and with formalities completed were on board and in our cabin well within half an hour; probably the best check-in 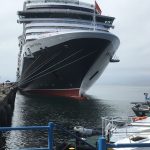 Here we go then

we have ever experienced.

Whilst waiting for our cases we walked around the ship to familiarise ourselves then back to the cabin to unpack “everything” for the first time. As the last ship didn’t have formal nights, all our “posh” gear stayed in the cases but now we had everything out.

As one would expect, the Queen Victoria follows the Cunard tradition; when you enter the interior, it is very elegant and it’s like walking back in time. The dress code aboard is also 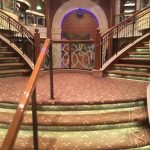 One of the staircases

traditional, shorts, tee shirts, jeans etc., are not to be worn after 1800hrs, after that time jackets have to be worn by the men, and ladies wear their appropriate smart clothes. Naturally some folk don’t want to conform, so they are “banished” to the buffet, and pool areas after 1800hrs.

After dinner, we are on the early sitting, we went to the theatre and what a spectacular theatre it is. It seemed we had walked straight into a London theatre at turn of the century, beautifully decorated, comfortable and roomy seats, and numerous boxes along the sides of the circle; what a marked difference from our last ship. Tonight’s act was a finalist in the show, “Britain’s got talent”, and her speciality was singing “Judy Garland” numbers and I am told by Christine she had a nice voice.

After the show we retired, we were both tired and it seemed the appropriate thing to do, after all we are aboard for the next 29 days, lots of time to do things.

Today we arrived in “Conquimbo” (Chile) but not quite 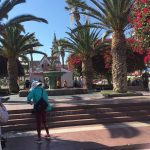 as planed, we were running on emergency power and had to have two tugs push us onto the dock. The embarrassed Commodore, had to put out a series of apologies and up-dates as we finally arrived rather on the late side, which meant all the tours were late leaving etc., etc. To add to the embarrassment the toaster didn’t work in the 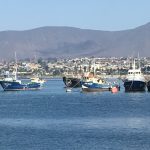 Some of the boats in harbour as we were under tow!

restaurants.   We were told it was an electrical fault and that the ships safety wasn’t compromised.

We went ashore to look around and not too impressed 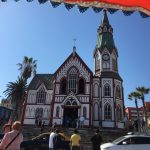 , though there were some interesting things to see.

Coquimbo is one of the best natural harbours on the coast and in 1550 when Pedro de Valdivia occupied the area for Spain; it became an important hub for the gold and copper industries within the area. Today it is still a busy port exporting amongst other things, Fruit, Copper and wine; it also has many fishing boats and a large fish market with restaurants along 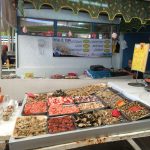 the quay. Sitting on the rocks outside the fish market were the largest sea lions we have seen, obviously they have a plentiful supply of fish!

The “Cruz del Tercer Milenio”, the third millennium cross is a 93-mitre concrete cross, erected in 2001 and it dominates Coquimbo’s skyline from the top of El Vigia hill. 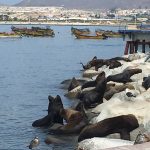 Lots of sea lions adjacent to fish market, I wonder why!

This monument is considered to be the tallest monument in South America.

Like all the cities we have visited we found the shopping mall, and once inside, couldn’t determine what country or city we were in. 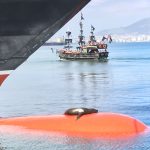 front.   As we arrived we were greeted by a ‘sea lion’ lying on this bulb. He/she was sun bathing and ignored the attention: no doubt he/she would have a shock when the ship started to move!!!

Sail-a-way was delayed; although the necessary repairs had been carried out, the Chilean authorities wouldn’t let the Q V sail until “they” were satisfied the repairs were good. No doubt they were ensuring we left Chilean waters, as they wouldn’t want to have to rescue us, again!

Our Commodore announced that all was well and that the failure was due to trip switch that automatically sent everything into emergency mode; we’ll never know!!!

Tonight at dinner, we found out a little more about the couple we share our table with. The wife is Australian but the husband comes from the Portsmouth area and he and Christine had a lot of reminiscing to do. Who knows they may have been on the same bus or something all those years ago.

Tonight’s show was magical; he was a clarinettist and played 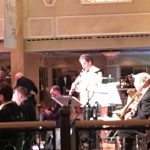 Brilliant so clever, he could make the clarinet sing

his socks off, which really got the audience going. What was nice was how much he appreciated the various members of the resident band. Many of them got to play solo, and a duet with him.

After the show we moved into the Queens Room, this is a very large room with a stage at one end and large dance floor surrounded with tables and chairs. We went along as it was sixties night, so looked forward to some good old fashion rock 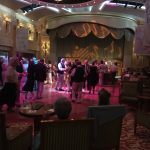 Latin and old time dancing, we should learn

‘n roll; but no, we were wrong. Yes they played 60‘s music, but not the rocking and rolling kind, so went for a walk around the ship’s promenade deck before retiring.

We now have a sea-day to relax and tonight we are donning our glad rags for this evening’s formal night. Not having tried them on for some considerable time, and having done a 35-day cruise earlier on tour, we were quite worried; will they fit, that’s the question!!!!

The day was for relaxing, pool, Jacuzzi and I went to a lecture on the engineering of the canal network in the UK; boring to Christine but I found it stimulating.

After a light lunch we rested until that “time” had come to get into our formal gear.

Wow it all fitted, there’s a surprise; our salads in B A obviously worked!!!! Tonight we met the other couple assigned to our table, Dave and Elaine, both ex Royal Navy. The six of us really “gelled” which is nice; it could have been so different.

After dinner we had our welcome invitation to the Commodore’s cocktail party where we all enjoy a few Champagnes at no extra charge, this was followed by tonight’s show.

When we were checking in at the port in San Antonio, we noticed an enormous black man also checking in. This big man turns out to be tonight’s act; he is an R & B and Soul singer. Christine thoroughly enjoyed the performance and could listen to him again; I on the other hand was not impressed, I couldn’t wait ‘till the end. Oh well we can’t agree on everything!!!!

After a wander around the deck we headed back to our cabin, time for bed.