Farewell to the Beagle 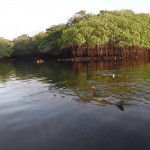 Black Turtle Cove with a stingray going through the water

We had a rude, though expected, awakening this morning when the boats engine started up around 0500hrs.  We had to be up and ready to board the dingy at 0600hrs for a trip into the “Black Turtle Cove” all this before breakfast would you believe, though we did manage to down a cup of tea before we left!!!

We entered this cove just as the sun was rising, this was a first 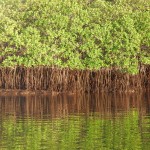 as though we were always up early, we hadn’t managed to see the sun actually rise.  Once in through the entrance the cove opened up into a big lake surrounded by Mangroves and as it was a very low tide many of the roots were exposed and the water was very shallow.  This shallow water helped us spot many a creature. 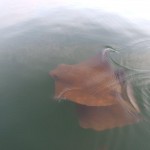 As we travelled around the cove we saw a variety of different sub species of Rays, White Tip Sharks, Turtles, Pelicans and on the way out of the cove, naturally a solitary blue footed Booby was there to wave us good bye!!  The whole party was a little apprehensive about this early start, especially as it was our day for departure but 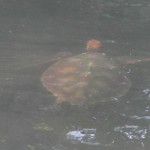 we were all very glad to have had this opportunity to make this one last boat ride.

We were back on board for breakfast at 0730hrs where we enjoyed Scrambled eggs and crispy bacon together with the customary plate of cheese, toast and jam.  By 0900hrs we had completed breakfast, packed all our bags, paid our bar bills, exchanged e mail address’ and we were, as instructed, waiting for our transport to the airport.

At this point I must say how well we all bonded.  Our age range started in mid twenties and went up to late sixties, yet everybody got along very well.  Apart from the first night, we were always mixed up around the table at each meal and the conversations generally involved everyone which much laughter most of the time.  , Duncan joined us for tonight’s meal and though he was very diplomatic with many of his comments, he seemed to enjoy this party; let’s hope we all contributed well into his “tips” envelope, he certainly deserved them; he was a very knowledgeable fellow or a great storyteller; we hope it was the former!!!!!

The bus eventually arrived so we jumped into the dingy for one last ride across to the landing stage where our bus was waiting, and 10 minutes later we were collecting our baggage and saying our farewells, promising to keep in touch with each other; I wonder!!!  We were off to the Angermeyer Waterfront Inn back in Puerto Ayora, the town where we first boarded the Beagle.  The rest of the party queued to book onto their flight for Guayaquil, leaving a couple of hours later, after which they would all go their separate ways.

We enjoyed a short coach ride, (the whole coach to ourselves), to the strip of water separating the two Islands, Baltra and Santa Cruz, then a short boat hop across the channel followed by a Taxi ride for the 42 Kms to the Waterfront Inn.

We checked into our room, “The Penguin”, (no number) and enjoyed a hot shower and a relaxing and un-winding lay on the bed.

Later we took a water taxi back into the town as we were desperate for cash; we had been having trouble getting our cards to work in various ATM’s at both the airport in Quito and the ATM here in Puerto Ayora, so armed with passport etc., went into the local bank and eventually managed to get cash.  I am very annoyed with my Bank, NatWest, as I specifically rang them before we left and said we were travelling Peru Ecuador and the Galapagos, and please mark my account accordingly, do not stop my card; so what do they do, yes that’s right, put a block on my card.  Now I didn’t contact the Nationwide to tell them our plans, and that was the card that worked!!! Anyway, armed with Dollars again, we had lunch in a local restaurant.  We then mooched about and found the LAN offices so decided we would see if we could book our seats for the long flight back but of course, we hadn’t got the flight details, so water Taxi back to the Hotel, collect flight details and taxi back across bay and we walked into the LAN offices for the second time.  After waiting quite a considerable time, they were very busy, we were told we couldn’t book the Guayaquil to Madrid leg as it was operated by Iberia, ha, we know it will be a LAN flight, so Christine will be trying to do it via the Internet tomorrow. 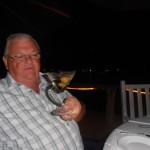 Back to the hotel, another shower then down to the bar for “happy Hour” though what we wanted to drink wasn’t covered by their “happy hour”, never mind we enjoyed our sit alongside the water mulling over everything we had enjoyed.

Jane and Dave gave us these two nights here as a wedding present and a nicer waterfront hotel you couldn’t find, thank you Jane and Dave for this fantastic experience and you were right, after everything we did whilst sailing around the Galapagos, we certainly needed the time to un-wind and reflect.

A leisurely candlelight dinner followed and then we fell into bed around 2200hrs, totally exhausted, after all it had been a long day.