Being so close to the lock we didn’t dawdle this morning so off we went, through the lock and under Swinford Toll Bridge, one of the two that cross the Thames. 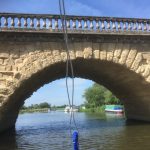 Swinford Bridge, where a toll is charged at 5p

This toll bridge is unique; it was privately funded by the Earl of Abingdon and opened in 1769 after numerous people drowned crossing this stretch of the river in the local ferry. The bridge is governed by its own act of Parliament and it allows the bridge owner to collect tolls. The act also makes building of bridges three miles either way from Swinford Bridge illegal; it also states that all owners are exempt from income tax liability in perpetuity. Today cars pay 0.05 pence to cross, and because there are no other crossings for at least 3 miles either way, this single lane road gets extremely busy, exacerbated by the time it takes to collect all the 0.05 pence tolls. Apparently there have been numerous attempts to have the tolls removed but to no avail and because of the extra mileage to go around, drivers have to suffer.

Oxford was the last major conurbation; from now on it is small villages and hamlets, the majority of “civilisation” we came across either 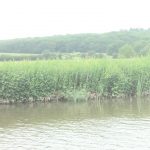 Flat boring scenery, with lots of horse flies that bite!

centered around pubs or locks. As the river wound its way upstream the countryside changed to agriculture, fields were growing nicely in preparation for haymaking; cows were grazing quietly in the fields and we noted several herds of bullocks being fattened up ready for the table!!! 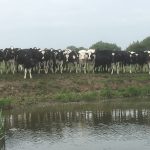 The cows in a long line just watching us!

Tonight we stopped on the private mooring at the Trout Inn at Tadpole Bridge. The mooring was empty, except for a canoe right in the middle, but it was convenient and it was a nice sunny evening so we made a management decision to dine there as well; excellent fish and chip with a very good selection of real ales; it turned out to be a “Gastropub”.

We met the owners of the canoe and they were canoeing from Lechlade to Teddington, funnily enough we had been debating if people did that, strange or what! 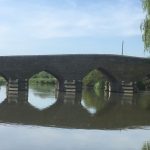 One nice thing heading up this part of the Thames are the bridges, not many modern concrete monstrosities built today, but mostly built in local stone and very old; Tadpole Bridge for example, built in 1784 and now a Grade II listed building.

Meandering into the “higher reaches” of the Thames, the river became narrower and extremely twisty, I don’t think I would be very happy steering a 72-footer up here. The banks were generally lined with trees and overgrown bushes and there was an abundance and variety of flying insects around; Christine was bitten in some very annoying places!!! We observed several shapes, colours and varieties of geese, many with babies. Swans were in abundance and of course ducks everywhere, again many with babies of all shapes and sizes.

One reason I particularly wanted to boat up the Thames was to visit a couple of old haunts I frequented, again during periods of my miss-spent youth. Firstly I was looking forward to returning to “The Swan”, a pub adjacent to Radcot Bridge. Incidentally Radcot Bridge is 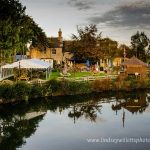 reputedly the oldest bridge across the Thames, built around 1200 and secondly the “Trout Inn” at Lechlade. Unfortunately we couldn’t find anywhere to moor at the Swan, so missed out on this visit.

With 3 locks to go we joined up with a couple in a similar narrow boat to ours and a couple with a vary short boat so we all fitted into the locks together, this made things easier on the “self service” lock, and we were through the locks where there was a “lock keeper in attendance” very quickly.

We arrived at Lechlade, the furthest navigable point we could get to, 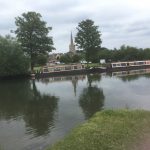 View from our mooring

and having been there, turned round. Smaller craft can go as far as Cricklade, 11-miles further on and the actual source is another 12.3-miles. Just up from Lechlade is the old access to the Thames and Severn Canal, opened in 1789, closed in 1933. There has been a “Cotswold Charitable Trust” set up to raise the funds and bring this old canal back into use, alas probably not in our lifetime.

We moored alongside a big field with a large herd of extremely inquisitive heifers that fancied eating, or trying to eat, anything they could get to on or off the boat. Fortunately we had been pre-warned about this happening and moored with lose lines so they couldn’t 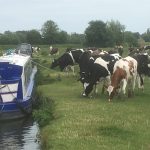 reach us! After dinner we wandered over to the “Trout Inn” to see if my adolescence memory of a fantastic restaurant was justified, yes the old beamed bar looked very much the same and the restaurant appeared as I remembered, but the menu, oh no, there was only one Trout dish, back in the day (late 50’s) they specialized as the name suggests, “trout” and there were numerous “trout” dishes. My memories of this place are either misguided or more probably, they now cater for the masses, as the pub is owned by a large London investment Company. I wanted to re-visit this area and had promised Christine this wonderful meal, only to be let down. We had a drink and left, we did not book a table for the following day.

We had a rude, early morning awakening with a bang on the boat’s 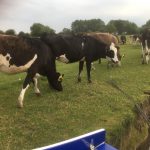 roof; it was the “rent collector”, he wanted his dues for parking on the public mooring, which is owned by one of the Oxford University Colleges, still £5 well spent.

We wandered around Lechlade, did some shopping, had a couple of pints and 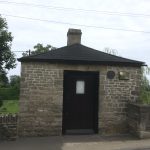 One of the old toll booths on the bridges

decided there was nothing much to see here and agreed to leave next morning and re-trace our steps back to Oxford. 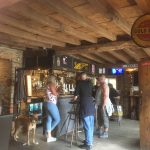 One of the old pubs!

We joined the Thames just east of Teddington lock and have travelled 207 river miles, been through 45-locks and the river has risen 71-meters (234 ft.) from the tidal part of the Thames. One thing we noted were the number of WW2 Pill Boxes lining the Thames, perhaps I will try and count them on the return journey!!!