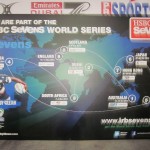 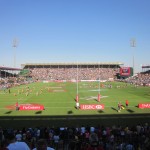 The day I have been looking forward to has arrived, the start of the Dubai rugby sevens, part of the RBS Sevens World Series. Rather like the F1 world championship, this is the seven a side rugby championship “circus” that competes around the world: Dubai is round 2 of this years.

Jane dropped me off at Abu Dhabi Airport where I got a taxi to Dubai. I had booked a hotel in Dubai as it is nearer to the Ground than Abu Dhabi. I arrived and checked into the hotel, picked up a local newspaper where it said there were free buses to the ground from several points within the city and made my way across to the local “mustering” point, a vary posh 5 star hotel, only to find out the newspaper was wrong, the free buses are only in the evening for returning back into Dubai City (which I knew about). The hotel porter got me a taxi and we set off to the ground, this was a metered taxi but I soon got the feeling I had jumped into the wrong type of taxi, the meter was spinning up like a top and though I was aware the ground was well out if the city, I hadn’t appreciated just how far away it was, it took a good 45 minutes to get there and the cost was about twice the price I had been advised I should pay. I also thought he had taken me for a joy ride, though after several other journeys I realised he had gone direct. It turned out that this “posh” hotel only used private hire cars with meters, for their guests, and as I had walked out of the hotel, well that’s what happened.

Thursday, my first day was more about reconnoitring the layout etc., but there was still 5 pitches with matches being played on. I spent most of the afternoon and evening watching the women’s 7am side rugby pool matches. The women also have their own World Series but here in Dubai they join the men and this makes for a great 3 days. 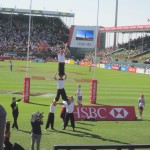 Thursday night I went to catch a free bus into town but as only one other passenger was on the bus it didn’t go. We waited about an hour then decided to share cab back into town. Alex, my companion, was the sports reporter for one of the local newspapers and he filled me in with “local knowledge” which made things easier for the next couple of days.

Up early Friday morning, taxi to the ground at half the price I had paid on the previous morning and arrived in time to watch the first match at 0840hrs South Africa V Argentina. 39 matches later I watched the Women’s final, New Zealand V Australia. What a fantastic climax to a great day of Rugby Sevens. The score at half time Was New Zealand 27 Australia 7 and it looked all over but when the whistle went for the start of the second 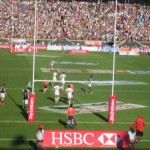 half, the Australians shot across the line, time after time and the game finished at New Zealand 27 Australia 35; what a turn around!

Dave also came over for the day and we met up with a number of Jane And Dave’s friends including Marian’s (Christine’s niece) old university chum and her husband Matthew. A great time was had by all and we sat in the “BP Stand” which is the party stand enjoying not only the rugby but all the entertainment both on and off the pitch. And though we are in a country that is not too happy with booze, here, in this fenced off enclave of western civilisation, we enjoyed beer and wine, also “pork” ribs and Bacon rolls. I now understand why this ground is in the middle of the desert and as far away as possible from Dubai but still be called the Dubai sevens. There are 5 pitches in this area and all the grass is wonderfully green and to the standard of the Twickenham pitch. The other bit if good news was 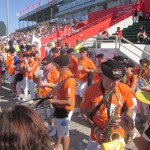 England qualified for the quarter finals and they will play Wales tomorrow.

I took one of the free uses back to town, probably a 20 seater though there must have been at least 40 on board, people were sitting on each other’s knees, bodies were lying across others and the music was blaring, an interesting experience but unfortunately we were dropped off the wrong end of town for me so had to get another fairly expensive taxi to take me across the city. The organisation of the buses looked very good as you approached the bus stops but unfortunately when we got to where we actually got onto the bus, it was a free for all. Everybody just wanted to get back to the city, hence I was on the wrong bus. I eventually got back to my hotel a little after midnight. 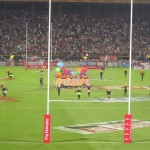 Up early again Saturday, checked out of the hotel, and taxied to the ground arriving about 0845hrs and as the first game was not ’till 0920 I had time to deposit my overnight case to the “bag Drop off” get a Costa coffee and breakfast croissant and be back in the BP stand for the first quarter final match, Portugal V Russia. Here during the course of the next couple of hours the same people from yesterday slowly arrived, so the partying started all over again.

Apart from enjoying the quarter, semi finals, there was the plate and bowl for the teams who hadn’t got through and also finals of various games played on the out her 4 pitches. Wall to wall sevens, and nearly all the games were exciting.

England won their quarter finals against Wales, much to the displeasure of some in our party! But were knocked out by South Africa in the semi Finals. However, the shock of the day was New Zealand, they were comprehensively beaten by Fiji in the semi finals, the result was New Zealand 0 – Fiji 44, the tournament favourites, blown out in a big way and with the women also losing, the all black shirts looked decidedly “Red”. Fiji then went on to play South Africa in the final and won, well done Fiji, it is nice to see the lesser rugby nations win for a change.

I cadged a lift back to Abu Dhabi with Amanda and Martin and they very kindly deposited me back to Jane and Dave’s front door, thank you both very much, it saved a lot of hassle trying to get a taxi!

I had a wonderful time at these sevens, I had forgotten how exciting this code of rugby is, Hong Kong sevens next; maybe!!!!!

This entry was posted in Dubai. Bookmark the permalink.