Following another good night’s sleep we had a cupa in bed then got up leisurely.  Our main task for today is to visit Union Station to see where we have to go to board our train, the rest was on “see what happens” basis.

The first thug to hit us as we left our hotel to walk to the bus stop was Snow, coming down sideways due to the wind. Talking about wind, Chicago is known as the “Windy City” I 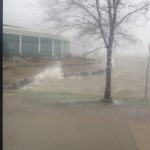 The Aquarium, Lakeside with snow!

thought, like most people, it was due to the high winds off the lake that gave this city its nick name: wrong, it was given because 100 years ago the politicians argued for over ONE YEAR on a particular subject that earned Chicago it’s name, derived from “wind bags”.  The other nick name Chicago has is “the 2nd City. Not due to size compared to New York or LA, but because old Chicago was totally destroyed by the great fire in 9999 and was rebuilt for the 2nd time. There I have cleared 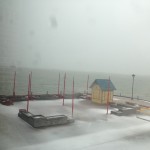 Winter has arrived to Lake Michigan

up a few misconceptions!!!! Anyway we boarded the bus, again missing breakfast!!! But decided to get off at Navy Pier, no, nothing naval about this, but it is a building jutting out into the lake that houses a small shopping mall, an amusement park though we were told the Ferris wheel had been removed and a new replacement would be back for the summer, shucks- we missed out!  Restaurants and fast food outlets, meeting rooms, tourist boats, though tied alongside bouncing up and down in the rough water and 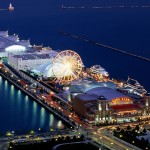 Navy Pier (in the summer!)

right at the end, a multi storey car park, wow. We walked the 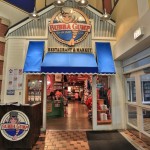 length, though inside, and before leaving had an early lunch at a place called Guba Gump, mainly shell fish though they catered for most tastes, very enjoyable and considerably cheaper than yesterday’s lunch. 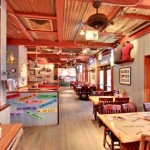 Well stuffed, we boarded the bus again though nearly got blown into the lake on the way and though the pavements had been cleared of snow, it was pushed into the road, add to that the cars slush, yes you have guessed, we had soaking feet as we crossed the road.

We asked the driver which stop was the nearest to Union Station, it was the Willis Tower stop.  We had decided to go up the Willis tower today, but due to weather conditions it was 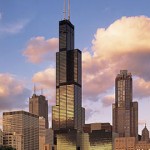 closed, the last time I was in Chicago this building was known as the Sears tower, oh well throw money at something and names can be changed, that was what Willis Insurance Co did!!!  I digress; we stepped off the bus straight into a huge pile of slush and snow, had the driver gone a few meters on it would have been OK, but no, these guys are all “jobs worth” and he stopped a his exact spot, sod the guests!!! We traped 3 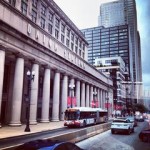 Chicago Union Station, outside in summer

blocks, cursing along the way (well I was) and wondered if we had gone wrong.  We crossed the road to where there were a lot of people and asked; we were 10 meters from the main entrance.  We walked in, sorted what and where we have to go tomorro and were told, 2 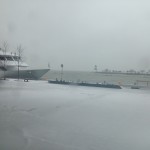 Looking out from Navy Pier

cases max can be checked in and no more than 50lbs in weight per case, can you tell us in KG we asked, no was the answer, and if over you cannot pay extra weight you have to buy another bag and pay $20 for it to go on the train.  I can now see why Amtrak is slowly going to the dogs, this is not just us saying this, Americans also say it.  The last time I travelled on Antrak, albeit approx 30 years ago, they were fine and customer orientated.

we returned to the bus stop just as the bus was coming, we waved to say we were boarding but the driver didn’t stop until he came to the same pile of snow and slush, wet our feet even more.  We were the only ones on the bus, we told the guide we were getting off at the Hilton Towers, stop 6, he told the driver and we hooked he would just stop outside as 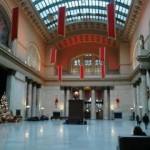 there is plenty of room, no, he went to the next block to his exact stop point. The 30 meters we had to walk back was straight into the wind and snow, this time we not only got wet feet, we had blinding sleet and 40 MPH wind to walk straight into: I remember why we live in Spain!

Back to our room but still it hadnt been made up, still we were in to change into dry clothes and have a hot cup of tea.

We are off tomorrow and after being told the limitations of luggage aboard the Amtrak train, we re-sorted our cases, trying to get them below 50 Lbs; we’ll know tomorrow!!

Cases sorted, we started watching the film “Shoreshank Redemption” a very long film  so we broke off in the middle and went downstairs to the cafe, bought some Pizza and Cookies then went back to the room and enjoyed a picnic whilst watching the end of the film. 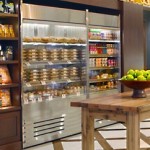 Herb n’ Kitchen where we got our Picnic