We decided to walk into town, do a “rekey” before Martin and Marian arrived but en-route realised we could bring the boat nearer, in fact adjacent to the railway station car park where they were heading to.  So back we walked, collected Foggy’s Notion and brought her to the spot just outside the car park and only a couple of minutes from the town’s central bus station, very handy. 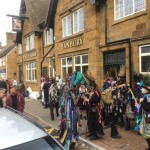 Dancing in the street

Once secured we were off again, wandered up one of the main streets and noted a number of Morris Dancers wandering about and realised they were probably part of the Folk Festival that was on this weekend but had no idea what or where things were happening. 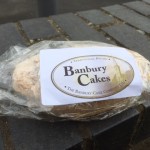 We walked up to Banbury Cross, the one in the nursery rhyme, did the touristy bit and 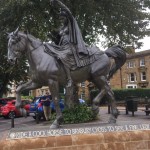 walked back, wandering through a number of small ally ways with the usual gift shops etc.  By this time we had built up a thirst and dived into the first pub we came across.  Christine did turn her nose up at the pub as it was crowded, no garden and noisy, still they had Hook Norton Ale and that was good enough for me!  Anyway after ordering we noticed a sort of rag tag and bobtail band in the corner and after a few minutes they started playing an assortment of music, some jazz, some country, some 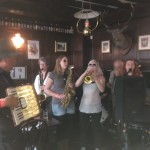 folk, but they were very entertaining so we stayed and had another drink.  We knew M & M were due around lunchtime or just after but were going to ring so stayed until they left.   It turned out there was a big parade starting at 1400hrs and they were leading it. So we followed them to the top of the town and wow, and what a site; Morris dancers, people in all sorts of weird costumes, several had costumes that simulated them being on horse back, many had blacked out faces and there were even some belly dancers, though well passed their sell buy date!!!!!

When the parade started we were well positioned to watch, right outside the pub we had visited earlier, so naturally had to pop back in!!!!  The whole experience was very entertaining and we had a great time and still we hadn’t heard from M and M but we 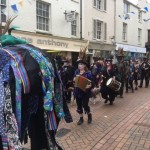 sussed out a couple of Indian Restaurants, Christine fancied “Indian” tonight, she only hoped M and M did as well!!! 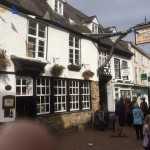 The pub we were in, the first one we came across was called the “Ye Old Reine Deer Inn” and it turns out this pub has a history.  Carved in the original stonework is the date 1570, was this when t was built I wonder!!!  Anyway, this was also a haunt of Oliver Cromwell, he used this hostelry during the civil war and it is thought it was here, in the Globe Room at the Rein Deer pub, that he planned the battle of Edgehill, 1642, the first pitched battle of the civil war. He was also here during the siege of Banbury Castle 1644/1645.

Martin and Marian finally arrived around 1530hrs so they came aboard and we sat and chatted, had a couple of Gin and Tonics and the girls enjoyed a bottle of wine until it was time to go out to eat.  Fortunately they were also up for an “Indian” and after searching the Internet we booked a table.  When we found the restaurant, it turned out to be the one we had looked at in the afternoon!

We had an excellent meal though the service was not too quick the company, and the ambience more than compensated for it.  Because of the Folk Festival, the town and restaurant were all busy.

We wandered back to the boat around 2230hrs said our goodbyes, arranged to meet again for lunch in Northampton next Saturday then went to bed after a thoroughly enjoyable day in Banbury.