Having had a lovely time at Lake Como, we are now moving onto Lake Garda, where we are meeting Mark Paula, Tyla and Ashleigh, it seems so long ago when we saw them last. 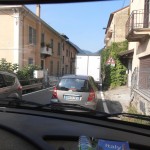 Everything is packed and off we go, well we thought we were, the roads around the Lake are very congested at the best of times, but today there had been an accident on the motorway, and all the heavy lorries were being diverted, for us to pass one, we had to almost touch the houses/walls on one side, all mirrors, had to be put in, then you just held your breath, on top of that, Geoff said one of the bikes were slipping, we couldn’t stop, we just had to keep going, very tense for about twenty minutes, we then went into the first lay-by, to find one of the straps had worked loose, whilst we were doing that, everyone went by, and we relaxed for 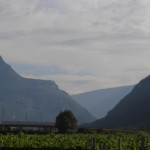 a few minutes, before we started again.  By this time the Police were on the case, and things seemed to run quite smoothly. Geoff once again did well with the driving.

We were having trouble finding a site, which we could afford the average was 50 Euros a night, which we thought was a bit steep, anyway we found a very quiet village, which had tennis courts and a big car park so we stopped overnight, whilst I was frantically searching for somewhere to stay. We have a site from Tuesday, which we booked ages ago, anyway we found one in Arco which is 5km away from Riva Del Garda (North of Lake Garda) where we are meeting the family, but we had to be there by mid-day.

I woke up first, took the dogs out, Geoff jumped out of bed and made the tea, we then left, it was only when we were on our way Geoff realised it was not even 8am. In view of the traffic around Lake Como, we went on the motorway, which was just as well, as the roads are the same.  We arrived at the site about 10.30am, the guy looked at the motor-home, and said you will need a Maxi plot, which is fine, we have a lovely space, and we were all sorted by midday. 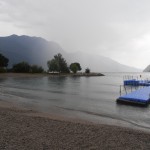 We have had rain!!

We had lunch, and then headed for Riva Del Garda, to look at the other site we have booked, but on route it poured with rain, we stopped and sheltered in the Tourist Board office, got some maps, and what’s on leaflets.  We then walked down to the beach; it was still raining, but not quite so bad.  It was lovely to 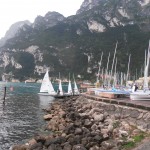 see all the young children in their laser sailing boats, apparently there was a regatta today.  We walked along the beach area, the shore line is better than Como’s, and they have designated swimming areas, looks very good. Geoff had a go at the ring’s he says he’s going to train for Rio, watching the Olympics has inspired him.

Geoff bought some posh coffee, I had some lemon tea, we sat and watched the world go 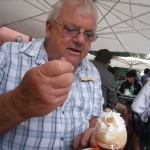 by under the umbrella’s outside in the rain, and well we are British!!

Back at home, we had a bottle of Chianti, with spaghetti Bolognese, very nice it was too.