A Day In Barbuda

Our alarm went off at 0600hrs, unheard of this trip and after a quick breakfast headed to Jolly Harbour to board the “Barbuda Express”.   We were told it was a prompt 0800hrs departure and to pay and complete formalities we “must” be there for 0730hrs.

We, along with many others duly arrived at the departure dock at the prescribed time, and waited, and waited, and waited until finally a woman arrived explaining it had been delayed at St Johns by the arrival of a cruise ship and therefore all port activities had to stop whilst this “monolithic cruise ship” docked.  The stupid thing is, all cruise ship activity at St Johns is available to all, even we know!   Why the Barbuda Express operators didn’t leave a few minutes earlier to compensate is beyond comprehension, everybody says “oh well this is Antigua”.  Anyway one hour later and we were on our way, we were also told the crossing would take 90 minutes and would be choppy, so sickness pills were available for those who wanted one. So I was a good girl and took one! 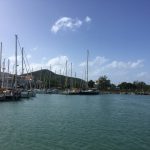 Heading out of Jolly Harbour and the first thing we set eyes on was the Benateau 43 we’d looked over and liked, sitting majestically whilst riding at anchor with its dingy alongside, ahhhhhhhh.  Out of the harbour and travelling north in the Lee-of-Antigua was very pleasant, we spotted the beaches we’d visited and the ones we have yet to visit, passing St Johns where the ferry started; why couldn’t we start there?, and as we left the protection of Antigua we were immediately buffeted by the Atlantic waves crashing against our starboard side.   This catamaran ferry rolled the lateral waves like a good ‘un as we headed at 20 knots (22-MPH).  Everybody was hanging on, any moving about was really not recommended, though one brave woman did visit the “loo” as she was green, but didn’t re-emerge until we’d docked.   Our 90 minute trip took 120-minutes, still, wet and shaken, but not stirred, we disembarked under a totally blue sky and heat to match, we met our driver and guide,”Devon”.

Barbuda is a small island located in the eastern Caribbean and is about 30-miles north of Antigua in the Leeward Islands and is part of the West Indies.  Barbuda is a popular spot for tourists because of its moderate climate, mainly due to it being very flat so it doesn’t 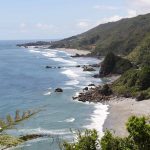 experience the rain like many other Caribbean Islands.  Historically, most of Barbuda’s 1,638 residents lived in the capital, “Codrington Town”, However, in September 2017,Hurricane “Irma” damaged or destroyed 95% of the island’s buildings and infrastructure and as a result, all the island’s inhabitants were evacuated to Antigua, leaving Barbuda empty for the first time in modern history.

Barbuda was discovered by Columbus in 1493 along with Antigua but was not a populous  island. Therefore in January 1685 King Charles II granted a 50 year lease to Christopher and John Codrington, born in the West Indies they and had inherited their land and wealth from 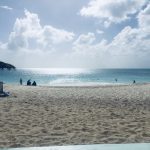 their father, and though their lease was for 50 years, their  descendants “ruled” the island ‘till 1833!

Though the Codringtons were wealthy and had sugar plantations around The Caribbean, and though Barbuda had minimal rainfall and very thin soil meaning it couldn’t grow sugar cane, their agenda was to raise cattle to feed their slaves and sell surplus to other landowners and by all accounts were successful. In their time they started a number of new profitable side lines, one of which was ship salvage.   Barbuda is surrounded by shallow water, much of which has nasty rocks which caused many ships to flounder. Now according to “Devon” the story is more sinister, he “says”, the Codringtons helped this along by setting fires to persuade passing 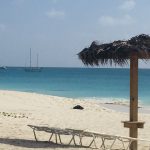 ships there was another ship between them and Barbuda; thereby upping the salvage tonnage!!!!  Another story doing the rounds is that during the height of those dark slavery times, Barbuda became a slave “breeding centre”, though this is now being questioned.  The reason could be that the slave population here on Barbuda was happy and had freedoms others didn’t, and this reflected in the fact that apart from the first intake, the slave population grew naturally. **

Our first attraction were some caves and en route we could still see the remains of the thorough devastation “Irma” caused.  One original 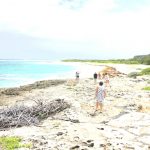 export was coconuts but as we passed by the plantation all the tops of the palm trees had been blown off.  Another area severely damaged believe was their race course, yes they had a race course and Devon seemed very upset it hadn’t been fully restored.   Incidentally the roads are like Antigua, full of ruts, potholes and tracks!!!

Arriving at the end of a track, we then had a short walk before reaching the bottom of the highest spot on the island and looked up at this large hole in the side of the rock.  Once we had clambered up to the entrance we wondered what all the fuss was 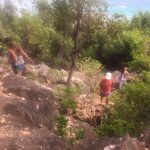 Climbing up into the caves

about.  Inside this big aperture we could see daylight through another hole, high up at the top which meant scrambling up rocks to get there and as we, like most others, only had flip-flops on, it wasn’t a goer, so we returned to the beach below to 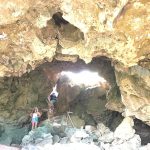 Climbing to the top

wait for the rest.    We think we should have been warned to take trainers or something suitable. 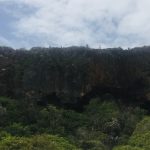 Back in the car, we headed off to the fishing centre quay and got into a small flat bottomed boat and headed over the lagoon to look at the “Frigate Bird Sanctuary” .   Christine had visited the sanctuary 14-years ago when we visited Barbuda on “Whitbread”.  Douglas 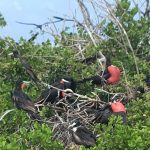 and I didn’t join the group, we sat in a bar; I didn’t miss going then and now I would have been happy to be back in that same bar with Douglas.   Once you’ve seen one frigate bird, you’ve seen them all.  The highlight for me was returning across the lagoon 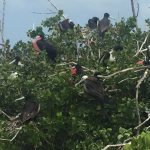 racing another boat, says it all I think!!!

The highlight of the day was next, a lobster 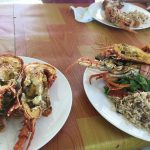 lunch in an interesting makeshift beach restaurant, but very enjoyable.  This was followed by a drive to the “Princess Diana Beach” but as the ferry had arrived late into Barbuda, and it wasn’t going to stay longer to compensate, we didn’t have a long time,  in 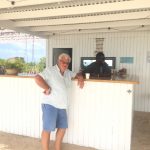 fact no time for a swim so had a rum punch instead.

The economy of Barbuda as one would expect is fragile at present and they have to encourage as many tourists as possible to visit.  The marketing of a “day trip” in Barbuda sounds very attractive but had no 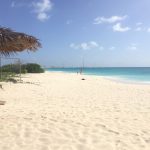 Such an idyllic place

real substance, still we’ve done our little bit towards re-building.   Post Irma the economy is struggling, currently their main sources of income comes from exporting builders sand that’s quarried somewhere in the middle of the island and it is clean, but unfortunately that is now coming to an end. Secondly they export Lobsters, These are harvested naturally from their lagoon, an area that’s very well protected and judging by the ones we had, are extremely nice and fresh to eat.  Lastly tourists, currently day trippers and a few that stay in the rented cottages still standing.   Prior to Irma there were several very posh and expensive resorts but they were all 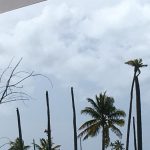 but “blown away” and have not been re-built.  It appears, talking to Devon, local politics has got in the way; what a shame.

One snippet of information Devon gave us was about land.  Every Barbadian has the “right” to own a plot of land, given to him free from the ruling council and on which he can build his own house.  This “gesture” gets right up the Antiguan government noses and has been a sore point for donkey years.   Talking of Donkeys, there are hundreds of them just roaming 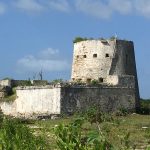 around freely, apparently they are descendants of the original donkeys imported back in the 18th Century.

The return boat trip was a little easier as generally we surfed the Atlantic waves but again sitting in the stern we were drenched, still it was warm and we soon dried naturally.

Arriving back in Jolly Harbour, the race was on to try and drive back before it got dark, partially successful but in the “twilight”, some oncoming cars had lights on but many didn’t and even worse, pedestrians were wandering about on the roads, dark skinned, dark clothes, and didn’t give a fig, unreel, still back at the ranch safely, shattered by the bumpy sea journeys but glad we made the effort, and it was an effort!!!!!

and I came across a theses done on the Codringtons of Barbuda by a Margaret T. Tweedy, Birmingham University, an interesting read.

This is the link:- 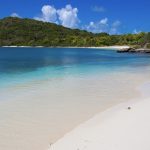