4 Sea days and the Azores

Life as usual went on during the four days at sea.   Dave and I played Elaine and Christine at shuffleboard, the evening shows, both very good and not so good, happened each evening, the lectures on smuggling continued and the food establishments did a roaring trade. The only blot on the landscape was black Saturday, England lost to Ireland at Twickenham and were crowned 6 nations champions and to top it all, it was St Patrick’s day; perhaps this gave them more “Wiz”; Well done Ireland, I sought a bottle of Bushmills to drown my sorrows!!!!

There were 2-acts that do warrant mentioning, “Mark Shortland” again wowed the audience with his impossible illusions, and a newcomer to the ship, “Dave Howes”, a highly talented multi-instrumental entertainer. He was telling us how he got his inspiration by watching Roy Castle as a lad; this chap also got a tune out of a bathroom shower hose with its head still on, and blowing up the leg of a Zimmer frame; quite remarkable.

We arrived into Praia da Vitoria, the cruise port on Terceira. This was the 3rd island to be discovered in the Azores, hence its name, “Third” in Portuguese. We arrived around 0930hrs and soon after people were disembarking, and we eventually got off around 1030hrs, jumped onto the shuttle and 20-minutes later were dropped off at the top of this very pretty old town. It’s funny, though I visited 3-islands in the Azores in 2010, I missed this one so it was nice 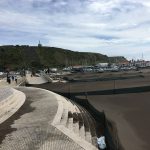 Part of the waterfront

that we both got to visit it together.

Settlers arrived to these Islands in 1450 and soon this place became the official stopover for ships plying their Atlantic routes; such as cargoes of spices from the East and Gold and Silver from the Americas etc. Charles Darwin even stopped over when returning back from Galapagos in his ship “The Beagle”.

The town of “Praia da Vitoria” takes its name from: the first 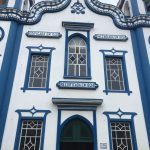 One of the churches

part after the battle of Praia Bay, when the Miguelists were defeated by the Portuguese loyalists troops in 1829; (this was all part of the Portuguese civil war known as the “Liberal War*”) and the second part of the name was an honour conferred on the town by Queen Maria II of Portugal in 1837 for its loyalty.

The old part of the town is very quaint and as you would expect there were a number of churches of which we visited 2. One was fairly austere and its shape was far from conventional whilst the second had a ceiling covered in gold leaf. The outside of the houses, churches etc., were generally painted white but 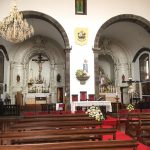 Inside of the blue and white church

they had either blue or yellow corners and window sills picked out, and 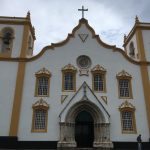 Another one of the many churches

the streets added to the ambience with the small cobble stones set out in patterns; very attractive. 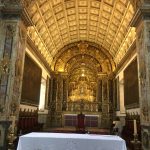 Firstly, we wandered down to the marina where there were several bars, restaurants and gift shops, all of which were full of guests from the Queen Victoria getting their Internet fix, us included!!! We had a wander about the marina and watched people climbing the 292 steps up to a religious statute, situated high up on the cliff; we declined. We walked through the back streets, getting the feel of the place but 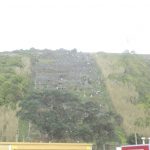 unfortunately it was a dull and overcast day with rain threatening, which didn’t show the town off at its best. We decided we most probably wouldn’t take a holiday here though apparently the weather is usually better, as the weather normally comes up from the Caribbean with the Gulf Stream.

En route to the shuttle we did a little necessary shopping, then stopped in some gardens, there was a café/bar and we enjoyed a couple of drinks and sheltered from the rain. Once it had stopped we joined the bus and returned to Q V. As we went overboard with breakfast we were happy to give the dining room a miss and instead headed to the Lido for a snack before the show.

Tonight’s entertainment is a group called “The Rewind Project”, the group is composed of members of the two 60’s/70’s pop groups, “The Moody Blues” and “10 cc”. There wasn’t an empty seat in the theatre, all the old rockers were there bouncing in their seats; it was a nostalgic performance for many and went down very well. They have a second, and a longer show on our last night; I think to get a seat we will have to get there very early.

Well that’s our last port of call before we arrive in Southampton on Friday, so we have 3-sea days left, including one more formal night to enjoy before picking up our bar bills; our internet bills; our alternative dining bills, and any other expenses we have incurred; there won’t be many dry eyes on board then!!!!!

This entry was posted in Azores. Bookmark the permalink.