Up early to call the alarm people, they called yesterday and couldn’t fix it, we need a new box, typical when we are going away.
After some frustration and two calls they said they would be with us at 10am, and in fairness they were, after 90 minutes fitting, moving testing still no good, they could not get a signal, so now we have to connect to telephone, which I am sure will be better anyway. Steve has come to the rescue, as they cannot do it until Monday, he will let them in etc. We eventually left the house at 11.30, we are so behind schedule, a breakfast at Sylvio’s set us up for the day, a quick visit to Barry to see how he was doing, after his first week of chemotherapy, actually he looked quite good, and was breathing better than he had been.

We finally left at 1pm, and travelled to Toledo, four hours plus a little detour, as I took the wrong turning, we found our hotel, which is lovely. Toledo is on a hill, and we are probably half way up, reception is on the third floor and you go down to the rooms, which are light and airy.

After unpacking, we went for a walk around town, up a few steps, then into escalators that took us to the top, amazing, we need these for our house. We wondered around, and came to an Irish bar where we decided to watch the match, having made that decision we walked around the narrow streets, and found a tapas bar, where we had a bottle of wine, ordered three different dishes and watched the world go by. We then went back to the Irish bar and watched the game, atmosphere was terrific, and Geoff enjoyed his Guiness.

Lovely evening, Geoff was happy as Wales had won, we walked home, and climbed into bed. Shattered. 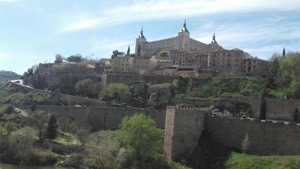 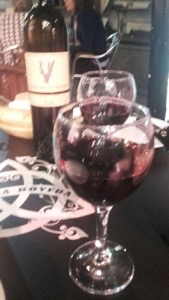 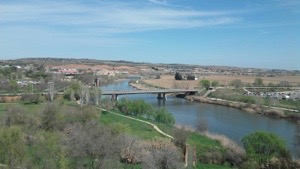