Woke up to blue skies, and sunshine, but a bit breezy, still nice weather though. It had rained in the night, and somehow the rain is coming in, on our bed, but we cannot seem to cure the leak yet!!

I did another load of washing, and started ironing what was dry, Geoff was pottering doing 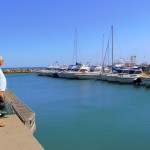 Geoff drooling ‘If only’

his manual tasks, by lunch time all washing had been dried, ironed and put away, so we decided to go for a ride.

We went into the local seaside resort, and Geoff spotted some oysters for sale, so suspect we will be going there at the end of the week again. We walked past a marina, where Geoff was seen drooling over the yachts, sadly I have past that stage. 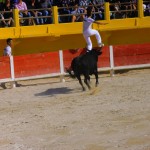 Inside the Bull ring

We came across an old bull ring, which we thought was being used for a horse show, so we went to look in, but to our surprise it was still being used for bulls.  Not sure what was happening, there were eight men, wearing 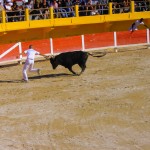 Connecting with the bull

white, distracting the bull, and then running away, with the bull in pursuit, they had something on one hand, and we think if they could touch the forehead of the bull, they scored points, but we are not sure, we watched for sometime, it was quite funny, sometimes, the bull actually 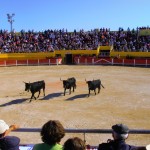 Cows coming to get the bull

jumped out of the ring, and into the outer ring, where the judges were, and sometimes when the bull refused to leave they bought on two cows to encourage them to go out with them.

We then made our way back to the bikes, and home.

We watched television, but as the wind was getting up, it kept going off, so we gave up, and played cards.