Our Magical Day Out

Up early this morning, as we were advised that to go up in the cable car, it was better 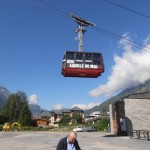 to leave about 7am, so I walked the dogs, Geoff made the tea, breakfast was going to be taken on the top of the mountain, we did notice whilst we were drinking the tea, that the cable car had not moved, but we walked around the corner, to see this huge queue, and to find that they were having trouble with the electricity!!  We waited for thirty minutes, I was in the cable car queue, Geoff was in the queue for the tickets, we waited another half an hour, and still no movement, so we decided to go back via the bakers for breakfast. About 9am I took the dogs for a long walk in the woods, they had a good chase around, I 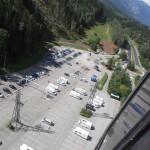 then noticed the cable car had started to move, so when I got back we re-joined a queue, and waited for our turn, it did not take long, and because they were packing us in like sardines, (50 per car) we were soon heading up the mountain.  With a bit of skilful planning, we managed to get on first, instead of 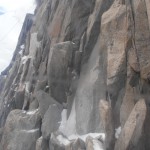 pushing in, we held back, and managed to stand right in the front, it was amazing.  We quickly rose to 2317m in the first 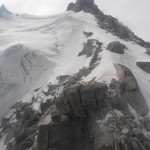 cable car, and we had to transfer to another one, where we rose to 3842m, the top of Mont Blanc is 4810m. The scenery, was absolutely indescribable, all I could keep saying is WOW!!  The temperature was 15 degrees at the bottom, and 0 degrees at the top, we had been warned about this, and had dressed accordingly. When we approached the top, it seemed we were going to hit the side of the mountain, it was the scariest bit, and both Geoff and I were struggling for breath, it was a horrible feeling, but was not going to deter us at this point. 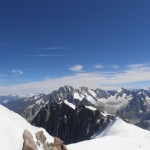 We had been advised to go on the Panoramic route, which goes over the top, and into Italy, so onto another cable car, this time, there was just four of us, and we happened to get another Welsh couple, so that was good.  We had to pay an extra 24 Euros for this trip, and it was worth all the money, and possibly 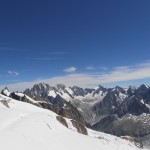 Amazing views from the top

more. How they have managed to build the cable cars up there we have no idea, but so glad they have.  It was so peaceful up there, and so magnificent, neither of us could think of words to describe it, the scenic route took about 45 minutes, you could just make out people camping in the snow, wouldn’t fancy that, but all seemed very happy, maybe 20 years ago!, A lot of people go up in the cars, and walk down, which is fine, if you have a guide with you, but 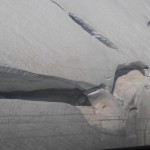 dangerous.  There were huge crevices opening, in the glacier, guess that is where the snow is melting, but it was all just amazing.  When we came of this cable car, we were both feeling 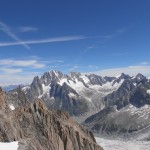 short of breath, I was feeling queasy as well, not sure if I was hungry, or the altitude, anyway we went and bought a roll and a drink, which seemed to help, although we still struggled to breath properly, obviously not fit!! We then did the return trip, well it just seemed to drop straight down, and we went through the clouds, which were funny, and down to the 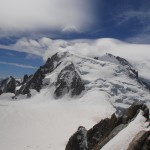 next level, where we entered the last cable car, what an experience, well worth the money, just for the scenery alone.

Back to ‘Rosie’ walk the dogs, then we had to go out again, we had bought a one day pass, which meant we could do other 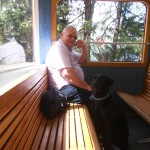 Sooty and Geoff on the Mountain Train

trips, so we were going on Montenvers – Mer De Glace a gentle 1913m, we catch a mountain train, so we can take the dogs with us. Catch the free bus, and go to stop 18, which is the railway station, then over a bridge to another line, and onto the mountain train, it took us 20 minutes to get to the top, certainly not a patch on the other trip, but as it was all thrown in, we 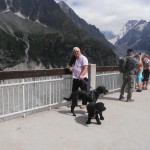 thought we would make the effort.  We caught the cable car with the dogs this time, to go down to the glaciers, but as 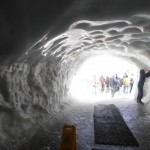 there were 380 steps to go down and then come back we decided against it, as we had been in one in the morning. Once you have been on the Aiguilles Du Midi, everything else will seem tame, but we walked around, had a cup of tea and we shared another roll, and then caught the train and bus back. As we got off the bus, there was a beagle running loose, which was annoying Sooty, well Sooty grabbed his ear, and would not let it go, despite us shouting at him, anyway the owner apologized and we helped him catch his dog, Sooty is in disgrace for biting. Back at home, Geoff made me a lovely cuppa, and we just relaxed, oh boy a fantastic day to remember

4 Responses to Our Magical Day Out