We picked the car up, and left Jan and Mike, and took our time to drive to Orlando, we were on the interstate highway, until Geoff decided it was coffee time, we left the highway, and went on smaller roads, which were bigger than our motorways! Anyway I spotted a
dunking donut and silly me I mentioned it, we immediately did a U turn, and headed back. Into the shop, and guess what, it’s cheaper to buy 6 than it is to buy 1, so we had to have six! Anyway a cup of coffee/tea later and two donuts, we carried on, we tried to stay on the smaller roads, because they were nicer, we constantly argued with tom tom, to stay on the 17/92 road, but we persevered and won.
We went alongside some lovely lakes 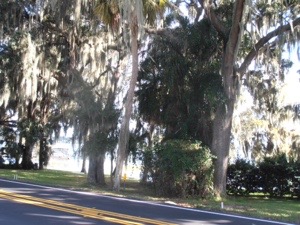 the trees were weird, but the houses by the lakes were lovely. 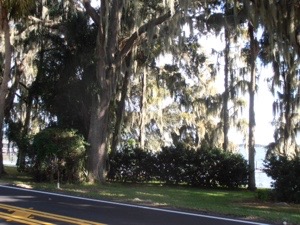 We were not in any hurry, we took all the side roads and eventually arrived in our Hotel, we were pleasantly surprised, as it was very comfortable, and the bathroom is a dream, after the house one, (which is not very good). The staff are very friendly, we even have a guy from Zaragoza Spain, who is trying to sell us something, we haven’t worked out what yet!
After some tea, we decided to go to the local Brazilian restaurant, more beef than you would imagine, a lovely bottle of wine, welcome to Orlando. 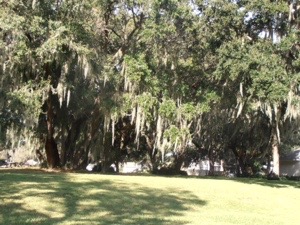