The weeks have just flown by, and this week is no exception.  Liz and Herbert kindly took us to Cartagena, on route we called in at a Caravan shop, as our air conditioning unit has packed up, we have never used it up until now, as the weather has not been good until we arrived in Spain, anyway it chucks out warm air instead of cold, and it is so noisy, that I cannot bare to have it on!  Anyway they will look at it, but the model is obsolete so not 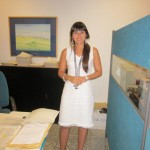 much help there. Onto Cartagena, where our bank is now, as we chose to stay with Esther, as she is so efficient, that at least when we are travelling we can get things sorted.  It was lovely seeing her again, although sadly she is not happy, as the big white chief watches all the staff, does he not know if people are happy they will work better!!

Back into the old routine, we went to Boules on Wednesday, and Geoff went to crib on Thursday, it has been good catching up.

Friday we had the results of our blood tests, and we are still living, more important Geoff’s PSA level is lower than last time,and my cholesterol is down too, we went onto our favourite steak house with Herbert and Liz to celebrate. Four enormous steaks, two fillets, two sirloins, Geoff was the only one to finish his, there’s a surprise, still he was under Doctors orders to eat red meat, as he is anaemic, so he had an excuse. 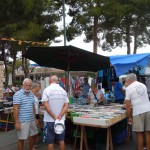 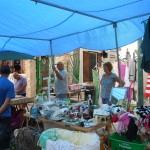 Pat and Vince working on stall

Sunday we went up to the market, then Pat and Vince came over for a BBQ, Geoff used his new toy, and we had the thick pork chops, they were lovely, and cooked to perfection.

Monday we went over to Herbert and Liz’s for a spot of lunch, 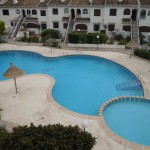 and a swim in there lovely pool, it is huge, and very deep, so you can do proper lengths, another good day was had by all.

Wednesday was the day we were going to have the air conditioning unit fixed, or replaced, so we were up early, walked the dogs, had breakfast, tidied up, and we were ready for the off, accept ‘Rosie’ would not start, very strange, as she has always been a good starter. Fortunately we had breakdown cover, so they were duly called, nothing left to do but sit back and wait. An engineer turned up about 10.00am, with a battery charger, we told him the batteries were fine, but he still checked, when it would not start he said it was electrical, and we would have to be towed into the garage. We were told it would take about twenty minutes, well 8 hours later, with a lot of calls between England and Spain the truck arrived.  After a lot of shunting etc., they finally had it on the 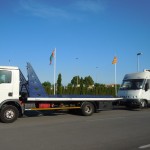 lorry, only for the man to say, he would have to take it off again, as he had run out of hours, well you can imagine what Geoff said, the air was blue.  Fortunately the lady on reception was very helpful, and translated between Geoff and the driver, eventually ‘Rosie’ was sent to the local compound to be collected in the morning.  The rules here are, that the owners have to arrive at the garage the same time as the van/car, not sure what happens if you have to go to hospital!! 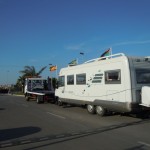 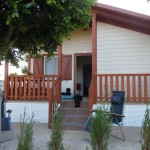 We booked into the chalet next door to us, which was fine, although no dogs were allowed, it was comfortable enough, although the beds were bad, so we slept in the two rooms, and we sneaked the dogs in late at night, can only book for three nights as it is booked for Saturday.

Herbert again came to rescue, and took Geoff over to the garage, which was in the middle of nowhere, they are saying it is the Cam belt, so it is going to be expensive….. Oh dear!!!

Not knowing what was going to happen to Rosie, I had booked my bike into garage for it’s first service, so we decided to do that, as it has to be done, we arrived at 11am, to find the garage, and it was market day, so whilst waiting for the work to be done, we wondered around, bought some fruit, had some coffee and churus with chocolate sauce, picked the bike up, back to the camp site.

Geoff phoned the garage, and they said, they could not strip it down until they had a guarantor for monies etc., well Geoff was furious, why had they not rung in the morning, they are now closed until Monday. We are now homeless, frustrated as Jane is coming out to Italy on Wednesday, and it looks as though we are not going to go anywhere!!