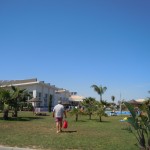 Well we have been here for two days now, and after the first initial impression, which was not good, so many tents and people around, lots of kids etc., we are now settled and enjoying ourselves, plus the camp site has emptied out.

We decided to walk to see Daphne and Steve for coffee, sadly Steve was working hard, but we enjoyed our catch up with Daf. We then watched the Pageant on television, how brilliant was that, only Britain can put a show on like that, shame about the weather.  As we were watching, Ricky and Mickey turned up, how lovely, to see them, they were out cycling, and thought they would be nosey to see where we were.  We had a laugh, and a good catch up, and will be seeing them again on Tuesday.

Daf and Steve turned up later with Charlie, so we have now caught up all the gossip, had a couple of drinks, they left early, as they are off to Barcelona tomorrow.We watched the final of the Apprentice, and then went to bed.

Up early as we had a Doctors appointment, we went on Pinky and Perky, which was good,  Geoff has to get his blood test sorted, and me to get my bones checked, so we have blood tests on Monday, and we both have hospital appointments for the 26/6, pure luck that they are on the same day!! Next stop the hairdressers, popped in to see Steve and Vuoka, 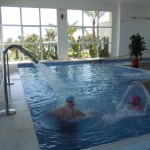 Pat and Vince, and it is still not lunchtime. 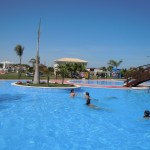 Back home we went down to the pool, for a swim it was lovely, we had the whole area to ourselves, we then went to the indoor pool, and really enjoyed the various spa’s they had there. All in all, we find it very comfortable and relaxing here, just wish we could avoid the week-ends!!