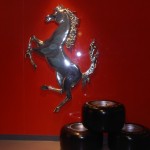 Whilst watching the Abu Dhabi Grand Prix on the box and when the overhead camera panned the skyline, I saw this big red roof with “Ferrari World” painted on top and naturally thought it was something associated with Ferrari and their F1 team; probably a showcase for their cars.  Well I was right in one sense, it was a show case for their cars, past and present, but more than that, it was a Ferrari Theme Park; roller coasters, rides 4D shows and a lot more. 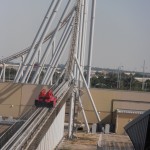 Joe, Jane’s friend staying over Christmas was not the adventureous type who indulged in such hairy activities but on this occassion she had no choice, Jand and Dave “persuaded” or should I say “told” her she was going on the fastest roller coaster in the world.  The description of this ride as per the brochure is 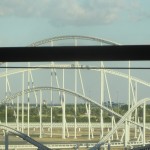 “Blast away on the fastest rollercoaster on the planet!  Strap yourself into the F1 cockpit, hold tight as you feel the acceleration of 240 km/h in under 5 seconds and discover what 4.8Gs really feels like.  You’ll launch 52 meters into the sky before flying through chicanes inspired by some of the world’s most famous race tracks” 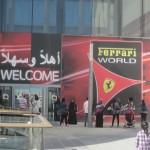 we arrived at the park,

queueing for ages to get our tickets then paid extra for “Premium” tickets; these meant we didn’t join the main queues at rides, there was a “Premium” queue which took prioritiy, well worth the extra.

Upon getting into this huge building, we headed to the first ride on our agenda, “Formula Rossa” the one mentioned above.  The board at the entrance to the ride told us the wait to get on was over 1 hour, however, armed with our premium tickets we were on in 10 minutes, good decision.

Now at this point having seen the roller coaster close up, we thought Jo waould have dug her feet in and said “NO WAY” but she didn’t!!!!  I have to take my hat off to her for going against all that her instincts were telling her, and naturally, I had to go as well; one couldn’t be seen to chicken out, can one?  Christine was on bag duty, well someone had to look after the bags!!!!

We boarded our car, Jane and Dave in the front, Jo and I in the back; strapped in, bar holding us down and we were off, wow, I now know what these Grand Prix Drivers put up with when the lights go out at the start, it was phenomenal and no sooner had we arrived at 240 kph than we braked for our first chicane and so it went up and down, round and round for about 2 minutes: hairy or what, the speed and the force round the corners not to mention when we arrived at the top of the ride, it felt as if we were heading into orbit, wow wow wow!!!  Grins from Jane and Dave, Grimace from Joe’s face and the shakes from me, I hadn’t been through anything like that and the nearest I had was probably about 30 years ago!  I believe Dave said I was going to be promoted from a Fossil to a “yet to be decided” name; ha ha Dave!

Next we all headed of to see a show, but fortunatly there was time to have a coffee, I needed something but had to make do with a coffee in this “dry” country, it helped!  The show we saw was fast and entertaining with jugglers, acrobats and gymnasts

Now we went for the next roller coaster, this is a race between two sets of cars, again on a 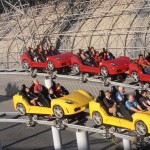 The Race Is On

big dipper but after the Formula Rossa, this was a piece of cake.  Had we had done this one first I don’t think Jo or I would have done the big one, this was still a fast and furious ride.  Again, Christine looked after the bags, with her glass back it would be very silly for her to do anything like this.

There was also an Ice Skating show, again spectacular with the 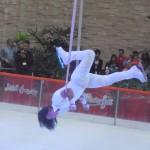 skaters not only doing what skaters do on ice but also were carring out manovers hanging in the air. 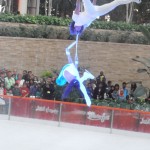 designers had managed to inject some excitement and thrill into this as well.  There were the usual dark areas where the floating car went up an incline or fell away into a lower pool with the associated screams from some people!!!  The theme for this log flume was the insides of an engine, very creative.

We now split up, Christine and I looking more at the gental rides and film shows etc whilst the young’uns went for more excitement.  Firstly we went to the “Speed of Magic”, this was a 4-D ride, featuring a 3-D movie where we experienced flying along crumbling cliffs, ice caves, bottom of the ocean and a fast trip through the jungle, spectacular or what.  Not quite the smooth ride Christine was looking for but enjoyable all the same.

Another exciting ride was the “Driving With The Champion”, in this ride we sat in a motion based simulator as the passenger in, first a Ferrari sports car, then from the cockpit of an F1 car, both driven by Fernando Alonso.  Again very exciting but for some unkown reason, Christine had the giggles all the way through this ride, neither of us know why, perhaps probbly due to the fact that as we sped along this Italian country road at breathtaking speeds, with Fernando at the wheel, we met a heard of cows and he not only had to weave in and out of the cows, he cracked a joke about saying “did you want some milk”. 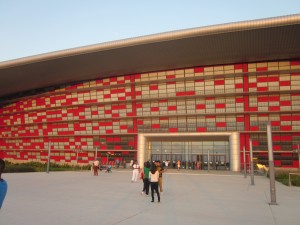 The Outside of Ferrari World

One of the rides ‘Viaggio In Italio’ was intersting.  As we queued in the premium queue again, we read the notice that said this ride was not suitable for people with a number of ailments, too many to mention, most of which Christine and I had between us!!! Still we went, after all if I managed the Formula Rossa, anything was possible.  Anyway we entered and sat in this very moulded, wrap around seatbelted seat with a bar accross.

Additionally Christine had to take her shoes off as they weren’t strapped on, OMG what have we let ourselves into.  There was a delay in starting as there were many people, me included, who were struggling to lock the safety bars in place, withour them in place you couldn’t go, fortunatly I managed, by leaving my camers out of my pocket, to lock the bar in place and then we were off.   The blocks of seats were hydraulicly operated and we all went into the air of this huge dome and settled when all these blocks of seats were stacked, one above the other, and we were watching an enormous panoramic screen. Now we knew why we were strapped in so tightly, health and safety and all that.  Then we were in a helecopter flying over many of the well known cities and areas of Italy, naturally including the Ferrari Test track and factory in Maranello.  A very good ride, as they all were. 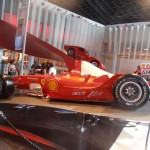 We visited the small mueum full of Ferrari’s, 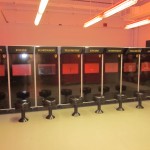 F1 Technology, in the pits

they utilise in todays Grand Prix Racing, we watched a film “Coppa Di Sicilla”  based on a 1920’s road race which featured Enzo Ferrari as a young man, then a nice comfortable slow ride travelling around italy in a Ferrari model car. There was even a competition, if you felt that way inclined, to change a wheel and tyre on an ex Michael Schumaker F1 car, naturally we declined that one.

We then all met up for a spot of food around 1730 hrs then continued around the venue. Eventually leaving around 2000hrs after having had a wonderful day and being thoroughly exhausted, bed called.

This theme park, apart from the two major roller coasters, is entirely under one enormous sculpured roof, very impressive. 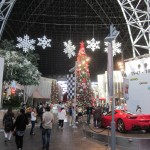 When we arrived and paid we were a little surprised at the cost but when we left we felt it was good value for money.  The rides were all spectaular, very technical and exciting and well worth a visit, we can highly recomend this to anyone.