Up early on Mia duty, what a joy she is, all smiles, Jane was mucking out, Geoff was taking Dave to work, I was left holding the baby, no complaints there! 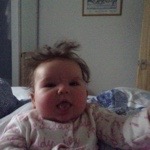 Stripped bed, cleaned bathroom, and left at midday for airport, a bit early but Mia had woken up and been fed, and seemed to fit the schedule, a lot of flights had been cancelled due to fog, so we were a bit concerned. Bags checked in, we were both nearly a kilo overweight, and that’s just the cases! Think we are both overweight now, goodness knows what it’s going to be like when we come back.
Dave said he would open the French doors and we could come in that way – cheek!

We headed for the priority lounge, and had lunch of chilli con carne, very nice, followed by lemon and blueberry cake, washed down with a couple of white wines and cheese and biscuits, and waited for our flight to be called. Only ten minutes late leaving not too bad, considering flight was full, due to the cancelled flight this morning. Really excited now, away until January very good.
The flight was very bumpy, a lot of turbulence, so I was glad when we had landed.

Collected bags, got a taxi, he couldn’t shut the boot, as our cases were too big, ha ha! So we went for half an hour with warning beeping, still we arrived, and the hotel is lovely. The hotel had security doors, and the guy came down to help with our cases, which was good.
The Hotel was built in 1905, hence the name circa 1905, and it is really lovely, to me it is very French, with lots of lovely extras, high ceilings and big rooms, our bed is 7foot, with a very old ornate wardrobe, the bathroom is very modern. We are very pleased with our choice of hotel.

We unpacked, then went for a wander, mainly to get some cash for e morning, but we stopped and had a drink and watched the world go by, despite the rain!