A day of uncertainty 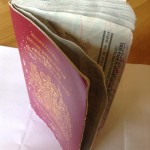 Up early Tuesday and off to the city with Dave, Jane was going to drop me off at the British embassy to sort out my passport, damaged by Christine who put it into the washing machine. In her efficient way she picked up my shorts along with the rest of the washing but never thought to ensure the pockets were empty. Anyway, parking the debate as to who is to blame, I had a problem that needed solving, that is a very water damaged passport.

The British Embassy web site said it opened at 0730 hrs so we arrived just after to be told it opens a 0800 hrs, so I loitered outside, probably looking very suspicious in the process. Security gates open and I was told I needed an appointment. After a few words the security man made a phone call, he handed the phone to me and after a few more words I was let in. I met a most helpful lady who, after looking at my sad looking passport and saying “oh dear”, explained the various options, but the main snag was they do not issue passports from This British Embassy; I am not sure if it is the across all British Embassies, but it was a disappointment and scuppered our plans and caused a major re-think.

The options at that moment in time were: apply to the UK for a new passport but allow up to Six weeks . This gave us an issue as we only have 30 day visas, we were planning a trip to The Oman on day 29!!!!! After explaining this it was suggested I return to UK and get a new passport, (this one is only 9 month old) But she was unsure if I would get out of Abu Dhabi being so damaged so suggested I went to the Immigration office for advice, so off by taxi, then I spent much time going from one section this enormous building to another, queuing a number of times, being told what a clean passport I had and eventually I was sitting in front of an Abu Dhabi official. Like the British embassy, he was also unable to test the biometric strip, so he tapped my number into the computer, confirmed I had to leave the country before 30 days, said my passport would let me out but it would not let me back in; well that told me!

Taxi back to Jane’s via the local mall where I eventually obtained my Abu Dhabi SIM card. To get this I had to produce my passport, again rude comments were made! The debate then started as to the best way to approach this sorry state of affairs.

After considering the various options and bearing in mind the short amount of time available and the fact we want to visit Sri Lanka whilst here etc., etc., it seemed the only viable, but expensive, option was for me to return to UK. I thought I would fly back day 1 pay for the 1 day service (day 2) and fly back day 3, simple and straight forward but no. The Passport office will not exchange a damaged passport on the same day, they will post it out to you within 7 days, so my 3 day trip is now a 10 day trip, ugh!!!!

Anyway I have made an appointment with Passport office for Monday, 9th so should get it back for the 16th and fly back on the 18th. I am keeping everything crossed that it happens to plan.

For the men who read this, beware not all ladies check trouser pockets before throwing things into the wash, this is an expensive mistake!!!!!!!