We woke up to clear skies, (that’s a bonus) just outside Bourne End moored at an old wharf. This mooring is owned by the Bourne End Spade Oak Trust who have bought up this small area between the railway and the Thames.   The plot of land has been cleared and cleaned up for locals to enjoy a peaceful relax by the river and also the wharf part has been renovated for moorings up to 48 hours.  The charge for an overnight stop is £5 which is obviously a contribution to the upkeep of this area of land.  What we did find strange that 100metres down river is the Bourne End Marina and their overnight charge is £25:  most other moorings along the Thames charge £8 per night.  Perhaps Bourne End Marina don’t want over nighters!!!!!

We stayed here for 2 nights as we had arranged to meet Liz (my sister in law) at Costa Coffee in the Bourne End at 11.00 and after the customary coffee and cake, we walked her to the boat for a drinky-poo or two before walking up the lane to the Spade Oak Pub for lunch.

We were a bit sceptical about going to the Spade Oak as though we had been there before and enjoyed it, Liz had heard several disturbing reports about it: I looked at a number of reports on trip advisor and on the whole the “likes” outnumbered the “dislikes” by about 60/40 so we went.  I have to say we thoroughly enjoyed the excellent food and the service was first class.  I don’t think Liz will listen to other people’s comments again!!!!!

We walked Liz back to Bourne end and when back on board put our feet up: we didn’t eat anything again before retiring for an early night.  We were glad we had paid for the extra night.

We woke up after a superb nights sleep, (must have been all the booze we had enjoyed at the Spade Oak yesterday) to a miserable morning, pouring with rain, dark and just plain ‘orable so we were very leisurely about everything, including breakfast.  We caught up with some reading when suddenly the rain stopped and the sky seemed to brighten up so we slipped away.

Our first port of call was going to be Marlow Lock where we could top up with water.  We have been very good at managing the water on board: we look ahead to where the next water point is and then en route, put the washing machine on. When we get to the tap, we start filling but at the same time take a shower or two.  The river isn’t that busy this time of year so we don’t hold anyone up.  When we leave the water point we have a full tank, we have both had showers and the washing is done;  win win all round.

Coming out of Temple lock, the last one before we arrived at our planned destination, Henley on Thames, we were told that there was an attempt to break the world distance record for a pedalo, yes one of those things you see on a local pond or off the beach, by a team raising money for charity.  We thought we were slow traveling along but the pedalo put our speed into prospective!!!

We arrived at Henley for a very late lunch, approx 1500 hrs, moored up and walked into town.  I have “interesting” memories of Henley cos when I was around 16/17 yrs old, one of my pals who had passed his driving test first, had a van and three of us used to drive to Henley from Ealing ( where I lived at the time) to a monthly Rock n roll evening at the Henley town hall.  We saw many famous names of that era rocking the night away, and one, that most notable, unfortunate politician, Screaming Lord Such,  “They were the days” as the song goes!!!!! Anyway we walked into the town, did a little food shopping, Christine bought several books she had been looking for from a market stall and then from a charity shop before heading slowly back, via a hostelry, naturally.

You may recall in a previous post I mentioned I fancied a Ploughman’s lunch some time and was told that was very “60/70s” well at the pub we stopped at they had one on the menu: lunch tomorrow I think.  To brighten up my day even more, this pub also sold “Abbot Ale” , wonderful, I haven’t enjoyed a pint of abbot since I lived in Cambridgeshire, late 70’s.

The weather this afternoon was mainly sunny though there was a chill in the wind but we still managed to sit outside at another pub right on the river, very nice.

Back on board we read for a bit as we couldn’t get TV,  we don’t seem to be awfully lucky picking up TV, I have even bought an app to find which direction to point the ariel, still we struggle so have to rely on “Filmon” though this does eat into my data allowance on my mobile.  I think it was a good job we bought several books.

Christine cooked a scrummy pasta stir fry using chopped up pork chops, lovely followed by some reading and bed, weather forecast for tomorrow not so good. 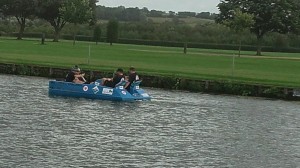 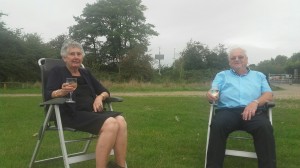 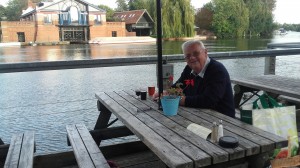 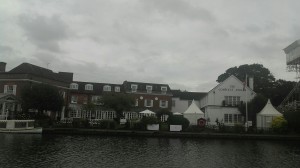