………..And that was just in the streets outside the Museum! 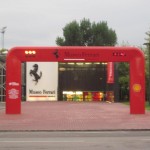 Yes we are in Maranello, the Mecca for Formula One Grand Prix Racing and the home of Ferrari. I say Mecca as Ferrari is the only team in F1 to have been racing since the inception of the world Championship back in 1950. Many teams have come and gone, some have gone and come back, but Ferrari is still challenging for the “titles”.
Though the museum attracts Motor Racing addicts from around the globe and naturally the main emphasis is on their motor racing heritage and achievements in all the various categories and formulas: This museum also traces the Ferrari History back to 1947 when Enzo Ferrari broke away from Alfa Romeo to set up his own factory in Maranello. His ambition was to contest the new F1 world championships commencing in 1950. 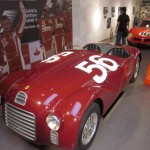 His first racing car, produced in 1947, was the Ferrari 125S, and was also the first car to use their well known logo, “the Prancing Horse” (see below), Enzo was quoted as saying at the time “A promising failure” this was probably the only failure he ever had! Also on display was his first production 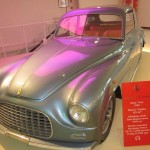 car, the Ferrari 166 Aerlux.
The first “Grand Prix” that Ferrari won was the Silverstone Grand Prix held on the 14th May, 1951 (driver: Froilán 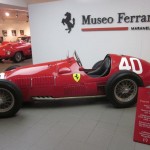 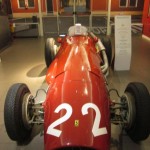 González) and this was followed by the first Driver’s world championship in 1952 (driver: Albert Ascari) and again in ’53 with the same driver. Their winning habits continued, to date they have won (up ‘till this year’s Belgium Grand Prix) 219 Grand Prix races out of the total of 849 (26%) that have been held over the 60 intervening years; not to mention the countless Le Mans, Daytona 500’s and various other formulae wins.
In addition to the largest collection of Ferrari cars in the world (as you would expect!!) there was the “Timossi – Ferrari Arno X1”, this was the Hydroplane built in the 1950’s, powered by the same 4.5litre V12 engine that powered the 375 F1 car that one their first Grand Prix at the Silverstone track in 1951. This boat actually broke the World Speed Record for its class (150.19 MPH) in 1953.
This was a superb visit, for apart from the numerous cars there was very old film footage of by-gone motor racing at various venues. When one watches the Grand Prix of to-day on the TV, we forget where Motor Racing has come from. The horrific accidents that took place causing death and serious injuries to both Drivers and Spectators; this was a regular occurrence at race meetings, totally un-acceptable in to-days climate of health and safety!!!!!!!!!!! A point to demonstrate the changes are the Crash Hats on display from each of the Ferrari world champions spanning 1951 to 2007. 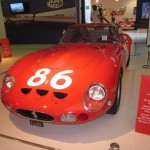 Like all Museums, there is never enough time to cover everything in depth however I am very glad I had the opportunity to spend several hours just “drooling”!!!
Both sides, and across the road from the museum were business offering Ferrari test drives, tempted yes, but too expensive!!!!! Also, In the background was the Ferrari test track and the sound of V12’s roaring around was something to behold.
Whilst I was “filling my boots” with Ferrari nostalgia, Christine elected to clean up Rosie and take Sooty and Bella on a long walk. I can’t understand how anybody could pass up the opportunity to view so many wonderful cars, oh well it takes all sorts!!!!!!!!!!!!
Bock to Rosie by Mid Day just as it started to rain (again!). When we arrived in Maranello the previous afternoon we were fortunate to meet an official Ferrari Car Park attendant who told how to “manage (break!) The car park rules” and we parked/slept in the actual Ferrari Museum car park overnight, very handy for the visit next day, and it was free!!!!!

Anyway, we left as soon as I returned heading for Florence where we had identified an Italian Aires close to the city centre. We had thought of stopping in Bologna en route as there is history there as well but decided against it, we can’t do everything.
There are two possible routes to Florence from Maranello; Autostrada or conventional road, now I wanted to go conventional but after a discussion we went Autostrada and thank goodness we did as both routes have to traverse the Galvana mountain range which was very high and very steep. To make things worse, it rained cats and dogs all the way up, across the top, and half way down until we suddenly arrived back into sunshine.
Arrived in Florence, fighting our way through typical Italian City
[youtubehttp://www.youtube.com/watch?v=Xc5KtxumtR8

Traffic where the mighty “rule” and the timid get “left behind”, found our Aires only to find the barrier was down and no-one around to show us what to do or how to get in. After searching to no avail we decided to reverse back out of the entrance (into a busy road!!) and move on towards Pisa only to find for some Italian Car Driver stopped right behind us hooting his horn. Anyway this driver obviously had the necessary zapper as the barrier suddenly lifted so in we went. After circumnavigating the site we decided it was obviously not for us, insufficient room, so back to the exit barrier. We were hoping it would lift, and low and behold it did, so we were on our way again, this time heading to Pisa.
We left Florence for Pisa, (maybe return on our next sortie into Italy), back through the city traffic, onto the Autostrada and “wham”, full stop: Traffic everywhere until the local “fuzz” set up a diversion and we filtered around a “Spaghetti Junction” look-alike, wound our way past a service station that we couldn’t access, juggled to force our way from 5 lanes of traffic into 2 then eventually arriving back at the toll booths we entered the Autostrada through about 2 hours earlier, and had to pay €1.60 for the privilege, huh!!!!!!!!!!! By this time we were both ravenous so we stopped in a service station and enjoyed a Spaghetti Bolognaise waiting for the traffic to subside.
Looking across to the other side of the road, the traffic looked to have cleared as it was moving fast so we were off again. Of course to get to the other side of the duel carriageway, we had to foray back into Florence! Back on the Autostrada and through the toll booths for the second time and wham, wall to wall traffic, again and back to fighting for gaps as before, 5 lanes filtered down into 2!! Still we accomplished that and about 30 minutes later we were flying having past the remnants of an accident where by now the only tell tale were several huge 1 ton rolls of paper parked on the side on the road.

Tom-Tom did its job and we arrived right outside the camp site as planned about 1800hrs, booked in, parked up and straight out with Sooty and Bella to search for this leaning tower. Our original plan was to probably stop for 3 nights but learnt that their published tariff, €16, was just the starting point, we had to add on; per person, per dog; trailer etc etc., so rather than being ripped off we decided to leave the following day after we had done what we needed to be done in Pisa the following morning.
Back to the Camp site, a quick game of crib, shower and bed, ready for an early start visiting the various sites thenext day.

The Prancing Horse logo was granted to Enzo Ferrari from the family of an Italian Fighter “Ace” killed in the First World War, it always adorned his fighter ‘planes.