Our last trip on (our last day) Sunday, but fortunately it didn’t leave the hotel until 1430hrs, so again more sun tanning time by the pool in the morning ready for the off. 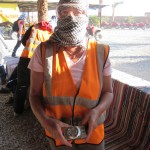 The coach took us to where the Quads were neatly assembled in a long row, and following a short familiarisation and driving test on a short circuit, we were off into the desert.Like any convey we were governed by the speed of the slowest, Christine and I were right behind the guide and trying to egg him on faster! Eventually he invited us to go ahead, I did but Christine was happy to stay behind. Our route through desert 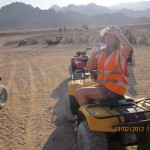 circumnavigated several mountains that were sticking up out of the desert and we drove between them; spectacular yet dramatic scenery, we were quite surprised, not as we had envisaged.

First stop was to ride the Camels, this Christine did with 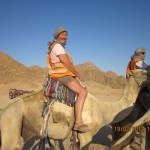 spectacular skill, I declined having done this before and did the camera work!

Off again, this time to the “Bedouin” enactment, though more like a second rate film set! Now we come to the only disappointment of our holiday. Firstly it was a lot colder than we were warned about; the food they served us was, frankly, quite dreadful, everybody left most it. Next we were subjected to what may loosely be called “dancing”, followed by these “dancers” getting most people up and doing the Hooky Kooky, very Bedouin I must say!!! Most of us could not wait to get away and back to our hotels for a decent meal. This was a great shame as the “Quad Guide” was excellent; the driving and camel ride experience was second to none, and the day was only spoiled by the second half. It would have been better to have just booked the “Quad Bike” ride only; still we know for another time.