Friday, and we were woken to the Captains dulcet tone over the PA confirming our arrival at the cruise terminal on the Dutch side of the 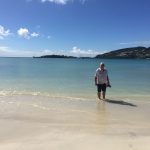 Island, “Philipsburg”.  This is a unique Island is so much as there are 2 countries here, Holland and France; currency, Euros in France but still Guilders in Holland with French spoken at the French end and Dutch where we are.  In the centre there is a very large lagoon that also connects the 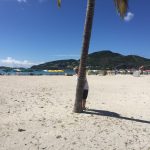 Should have bought our swimmers!

two countries, and it was here we moored many times in the past on Anam Cara. 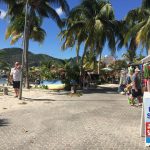 We went ashore, jumped onto a water taxi and headed to the town, we were going to take our swimmers but decided not to.  Once we arrived at the pier taxi terminal and got “up-close” we regretted our decision, the beach and sea looked so inviting: oh well, it is what it is, get on with it!! 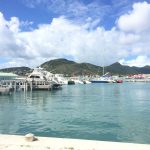 We wandered along “Front Street”, this road runs parcel to the seafront promenade and is lined both sides of the street with jewellery, clothes and watch shops.  You can’t go more 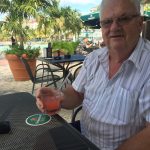 than a few steps without being accosted by shop keepers trying to get you inside.   Ever since Rio de Janeiro where Christine lost her Bvlgari in the sea at cocacabana beech she has been looking to replace them but obviously this particular model has been discontinued.  I had already checked there was a Bvlgari shop and when we stumbled upon it in we went, expecting to come out empty handed.  No such luck, they had a new range called “diva” and in that range there was a pair that Christine fancied; ah well that’s taken care of the Birthday present and the name of the range was very appropriate!!!!!!!!!!

It was time for a drink, rum punch being most appropriate but the one served at this rather touristy bar was rubbish, me-thinks they just showed the bottle to the glass??? so after finishing it I was 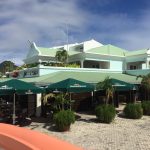 determined to find a real Rum Punch.  We wandered around and found a back street bar, full of locals and away from the touristy areas and as a bonus, they had “Ting” a local mixer and especially good with rum; we had landed in the right place.  Several “Rum & Tings” later we headed back to the ship and being the “local” bar, and still with money in our pockets!!!!!!!

Back on board and headed to the stern to wave good by to St Martian, tomorrow we arrive at St Lucia.

Again early this morning we woke to the Captain announcing our arrival into Castries. The good news is it isn’t broadcast in our cabin, but unfortunately we do have a speaker just outside our cabin door, so really hacked off.  We ambled down to breakfast and heard several announcements from the captain apologising for the slow processing of the guests waiting for a tender.   What happened we no not, but after a number of apologetic announcements from the Captain, he delegated it to officer of the watch, coward.  Open tendering eventually came into being around noon by which time we had decided not to bother.  Castries is a port town with little or no interest to us and had we had the full day we may have gone to re-visit old haunts, such as Rodney Bay or Marigot Bay or perhaps Soufriere, where the Pitons are.  Still we had a relaxing day aboard.  Tomorrow we head for Barbados