First day sailing, so Jan and I decided to do some washing, well we wished we hadn’t bothered, as everyone else had the same idea, Jan came up with lunchtime, and she was right, we managed to put the washing in before lunch, rush through a pub lunch, and take it out after, straight into a free dryer, that’s the darks done, whites tomorrow, plus of course there’s the ironing to do at sometime.
One of the restaurants converts into a pub once a week, you can get scampi and chips, fish and chips, chicken curry, and scotch egg and salad, last week they had steak kidney pie, fish and chips and a ploughman’s, it makes a change the only problem is it always clashes with a formal night. I went back to the room, where I was supposed to be meeting Geoff, he was longer than I thought, he had been roped in to do the “sexy leg competition”. and guess what he won! wish I had been there to watch, he won another water bottle.
After lunch and finishing washing we went on top deck and played shuffleboard with Jan and Mike, we were not very good at it, but the girls are leading. We then took our daily swim, jacuzzi and cocktails, met another couple from UK, who were giving us some great ideas for future holidays, they have certainly been to some great places.
Formal night tonight, well I decided I wouldn’t even bother to try my long dresses, and to wear the dress I had for the christening, just before I came away, well I did get into it, but oh boy it’s very tight, I think my boobs must have grown three sizes, strangely enough my hips are still ok! Geoff put one shirt on, he was so hot struggling with the collar he had to change too, but his suit fits him fine.
We had a lovely meal, then watched the show, and then rushed back to the room to change, and go and play table tennis, when we got there we came out at the wrong place, and ended up playing crazy golf, I really enjoyed it, after, we played table tennis, the girls lost by one point, so not disgraced. The table football was a joke, the boys just whitewashed us, after all that, Geoff went for a swim and then we all went to bed. Guess what we are still being told “I have the sexiest legs on board” ha ha ha

We had a lay in, in fact I didn’t wake up until late, so we feel fit to play again. Breakfast was very busy, so we didn’t linger, Geoff wanted to go for a talk on Ships, it was all about the cruising business, he thoroughly enjoyed it, I went to do the ironing, and another load of washing, which worked very well, I met Mike and Jan, for coffee, Geoff was now listening to another talk on Mexico, our next port of call.
Meanwhile I finished the washing, and some of the ironing, we all met at the coffee Lounge and enjoyed coffee, and the boys had their brandies.
We stayed until lunch, then went to the buffet, where I had a little salmon, with a big salad, time to cut back! Otherwise I will not fit in to anything!
After lunch we took a swim, did lots of exercise, avoided the jacuzzi, but kept swimming, the sea is as calm as I have ever seen it, but the pool was like it had a wave pool in, it was great fun. Jan has disappeared to do the ironing, when she returned we went and played shuffleboard, it is quite a hard game, and sadly the girls lost, but we then played three games of ping pong, and we won, so all is equal on that front!
Another swim was taken before we changed for dinner, went to the show, which I fell asleep in, I am shattered. So an early night was taken. We get an extra hour in bed tonight, as the clocks go back one hour.

Last night we had to change our clocks again, so we went back another hour, yippee an extra hours sleep, I think we are now seven hours behind UK! Well you would expect to wake up early, but no we slept till 8am, so we were late for breakfast and missed Mike and Jan altogether.
I caught up with the ironing, and Geoff watched a film on Princess Grace of Monaco, we then went for coffee, and after had a game of shuffleboard. We are getting better, and only lost by 2 points, which can’t be bad.
We went for lunch in the restaurant, the starters were very good, but we were disappointed with the mains, still can’t please everyone.
After dinner the weather has become overcast and chilly, with a lot of wind, but we went swimming and went into the jacuzzi, we stayed in for a while, it was warmer in the pool then outside.
We didn’t stay long, but went back to the room, to see if I could get into my long dresses, which I can, so will be wearing one of them for the last formal night on Friday.
The show started early tonight, and the guy had a fabulous voice, he could sing Ray Charles, Brook Benson, Louis Armstrong, he was amazing, really enjoyed it.
We then went to watch a film, then went onto a Country and Weston night, with an adult comedian after, so we had a busy fun evening. 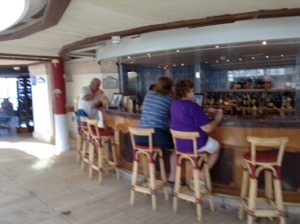 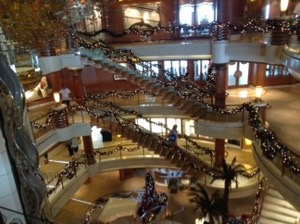 This entry was posted in Princess cruise. Bookmark the permalink.