Awoke bright and early, well not very bright and not too early as it looked a miserable day, still we are here in Arcachon for two reasons, firstly for Christine to see and climb the largest Sand Dune, “Dune de Pilat” in Europe and for me to enjoy fresh oysters, but first breakfast. Having had a couple of bad weeks before leaving home and a few nights in a hotel plus restaurant meals etc., we thought we should ease up a bit so had some cereal in our room; a gesture towards our diets, ha ha!!!!!!

First the Dune de Pilat, I distinctly remember that after the last climb to the top 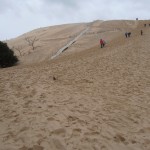 approximately 30 years ago, I stated quite clearly I would never climb that sand hill again, huh, that didn’t’ work! After a tour about town trying to find the right road to the “base camp” we parked and started the “trek”. It started as a steep hill walking in soft sand but as we neared the first plateau, it got steeper. Each time a step was taken and the weight transferred to the foot, the soft sand gave way and the foot went back down; each step g 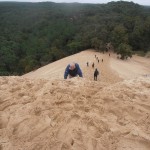 ained about 2 inches and if that was not enough, it was so steep we were on all fours, but in the vertical position!!!!!! At last we arrived at the top of what turned out to only be the first climb. After a short rest we were off again, trudging through the soft sand. Oh yes by this point our shoes were filled with the stuff! Anyway we eventually arrived at the top, 109 metres above sea level but judging by how many steps we took, it seemed like 5 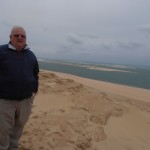 Kilometres high. At this point we had the full force of the wind along with the sand being blown into every nook and cranny, so a few quick pictures and we were off back down again. As you can imagine, The descent took a fraction of the time it took us to climb the wretched thing. I will say it again, and this time I am sticking to it, I WILL NEVER CLIMB THE DUNE de PILAT, AGAIN! Twice in any bodies lifetime is enough. Still back at base camp, cold, shoes and socks full of sand, sand in our hair, ears and eyes and god knows where else, we had our sanity restored over cups of coffee and tea.

Next we were off to find a suitable restaurant for oysters, but first via a supermarket as we 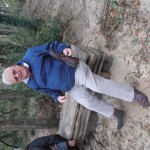 wanted to eat in this evening. We found a rather large “Intermarche” supermarket and after some heated discussions about what to buy we were on our way. We stopped for diesel as we left and were amazed at the price, €1.26 per litre, even cheaper than Spain; what a result though compared to €1.10 per litre in Andorra, still expensive.

By now the rain and wind was beyond the pail, we; well I, was grumpy, cold and hungry, not a good combination so we drove into the centre of Arcachon to find food. The place was deserted and most restaurants were closed but after preservering, we found 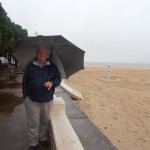 somewhere that not only sold oysters but was busy as well, always a good sign to eat there. By this time caution went to the wind, the full 3 course “Plat De Jour” was called for and very nice it was too,all washed down with suitable local wine.

By now it was mid afternoon so had to try and walk some of the lunch off so we tried to stroll along the sea front but with our umbrella blown inside out, the rain lashing us, our feet wet as there were more puddles than dry places, this didn’t take too long. So back to our hotel room and a few games of crib. Oh yes the food we bought for to night went into the freezer as we were still full from lunch time!!!!!

This entry was posted in France, Uncategorized. Bookmark the permalink.