Plans were made for this “Very Important day” well in advance as I was hoping to get tickets for the Local Derby, Northampton Saints V Leicester Tigers.  This fixture is always sold out well before the tickets go on sale to the general public, so, as I have always said it is not what you know, but who you know:  Step forward Jeff.  Jeff is a season ticket holder and as such has priority to buy tickets, so as you can imagine, Jeff was the top of my list of guests!  He finally managed to get 11 tickets;  well done and thank you Jeff.

Saturday Morning dawned bright, though cold, and following a hearty breakfast Dave and I left Jane and Christine to do what girls do best !!!!!!!!!! and headed round the M25 and up the M1 when I suddenly had that awful feeling, something was wrong, aaaaaah, I had left my coat behind!!!!!  We were too far up the M1 to go back but I had to find somewhere where we could buy one at very short notice.  After a hectic ‘phone call to Mark he suggested the Garden Centre in Wootton, this was fortunate as several of us were staying at the Holiday Inn Express also in Wootton!

We flew into the shop and after looking at all their stock, two that fitted (red & Blue) I plumped for Blue, then onto hotel to check in.  No time for a quick drink as we were due to get our taxi at midday sharp and meet the rest of the party at the Rovers, a rugby pub just up the road from the ground.

We booked in successfully, Taxi arrived on time, and we arrived before the others and “got em in”.  The rest arrived within a few minutes but by us getting their early, we had a large table with chairs very close to the bar to sit at.  Originally we were going to meet 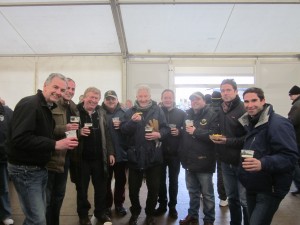 elsewhere, but at Mark’s suggestion we went straight to the Rovers.  Had we had gone elsewhere we would not have been so comfortable, which was pretty essential, bearing in mind several of us were over ’60’s and all that!!!!

Martin was elected to hold the kitty, Mark collect all the ticket money, Jeff handed out the tickets whilst a few pints were drunk, then to our dismay we were told there was no more Guinness left, well can you imagine our disgust as well as the other Saints supporters being distressed.  Can you imagine a Hostelry pro-porting to be a rugby pub, running dry on Match day, what ever is the world coming to!  So disgusted, we all toddled 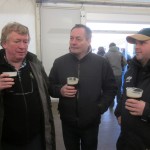 Guinness to the ready

off into the ground and found the Beer tent.  Apart from being more expensive, there was plenty of stock but unfortunately we seemed to have to queue for ever; not good when one is thirsty and on a mini rugby tour!!!

At this point, I have to say there were two invitees who went AWOL, one had “man flu” and the other had “another engagement”  At this point I will not name and shame but I may do later in this piece!!

So 9 of us took up our seats all looking forward to a great game, both teams were up to 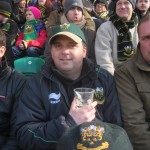 Mark’s Last Guinness with Great Expectations before Kick Off

full strength as the 6 nations had finished the week before, 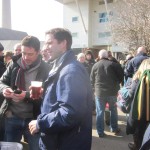 though we won’t talk about those results, and our expectations were high, hopefully with a Saints win.

Ouch, Leicester Tigers turned on the pressure from the start and Northampton Saints left their skills in the changing room. Talking to several people around the ground, it appears the Saints only seem to play well away from home, this is rather unusual, traditionally teams normally play better at home! 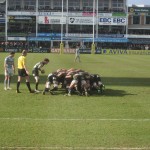 The Saints won the “Put-in” Wow! 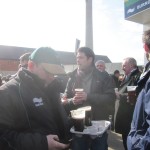 Anyway we were all comfortable, sipping the several hip flasks that were circulating, not too sure what was in them, each tasted so different, still they cheered us up and we were all under the impression the second half would be better, we were wrong!!!!!  Northampton were outplayed in every aspect of the game; that’s enough said about the game, we won’t even mention the appalling score-line, 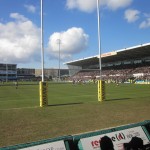 At least the Ground looked good

needless to say the air must have been blue in the changing room,  a new manager maybe!  During all this time one can imagine the buffeting, the ridicule, even the abuse I was subjected to for leaving my coat behind and having to buy something that I would not normally have bought, oh well I did rather set myself up for this fall; still if had not been the coat, I am sure they would have found something else to have a go at!!

After the final whistle we were all back to the beer tent for a few pints to drown our sorrow, reflect on the game, pontificate on future changes and strangely enough bump into several depressed friends from past. 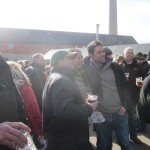 What’s the attraction that has caught your attention???

Being some of the last people to leave the ground, we could go to the bar at will, 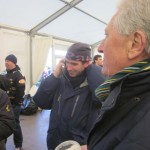 Some people are never far from a ‘phone!

no queues at this time which was probably as good as it was going to get at Franklins Gardens that “black” afternoon.

Out of the ground and over the road straight into the Indian Brasserie (pre booked) where we enjoyed some great indian food, well all but one of us that is;  Derek had an “excuse” to not join in so had “something” and chips, oh well there has to be one though at least he came in with us, well done Derek!!!  This was an excellent choice of restaurant both for food and also as we had several players from both teams come in.

After dinner,  several Gin & Tonics, red wine and a few beers to-boot we were off to the Thomas a Becket where we were assured they had Guinness for a night cap or two or three followed by “carriages”  well, taxis organised for everybody thanks to Mark.

The four of us arrived back in the hotel, then back to the bar for another night cap before finally making our way to bed around 2300hrs, I think!!

A wonderful Stag Day for me and I would like to thank all participants for making it such a memorable day, and I hope you all enjoyed yourselves as much  as I did, thank you all for coming.