Polo in the afternoon

Polo in the afternoon

Up at the crack of dawn, well for us what with jet lag etc., with the responsibility of walking Doogle and Oreo, the Littlejohn’s children!!!!! Dave and Jane were on a mission, the paperwork to import their horse trailer had to be delivered to the shipping agents in Dubai ready for customs clearance next week.

Our walk was interesting, bearing in mind the severe rain that fell on a land with no drains. We paddled across sodden, ‘orrible muddy squelchy sand wearing totally the wrong sort of footwear, still the dogs enjoyed the walk around a building site! Back to the house and showers for the dogs before we could let them in, then foot baths and shoe cleaning for us: The things we have to do as Guests. 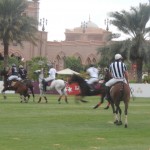 Dave and Jane returned about mid day after a successful round drive to Dubai then it was all action stations as we had showers and dressed into our finery ready for our posh afternoon at the Polo match. We drove the 30 minutes to the Emirates Palace Hotel and wow, what an impressive building, very Arabic in its construction, well one would expect that, but across the way (about 1 km) were modern skyscrapers being built, quite a contrast. Apparently rooms in this hotel start around £1,000 per night, sufficient to say 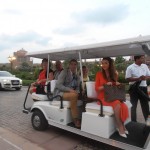 that polo pitch is on their front lawn!!!!!

As we jumped out of the car, there was the parking valet waiting to take and park “Pedro” (that’s the car’s name) so we collected our entry tickets and arrived at the side of the pitch just as the two teams, Milan and London, were warming up. We weren’t to sure as to whether the match was a semi final or the final. Today was the second day of a Coutts sponsored tournament for a number of international teams. Anyway, whilst enjoying our “Pimms Coctails” we found out that this first game was the playoff’s for the shield and that the next game would be the final. This first game was exciting as London were leading after 2 chuckers, ok half time! It was then the 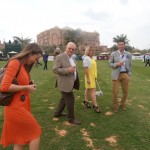 spectators job to tread in the divots, so there we all were, dressed to the nines with ladies in high heels, all treading the grass down. In spite of all the the rain earlier, the ground was firm, thank goodness. The second half got under way and Milan got their act together and by full time the score was level at 8 goals apiece. We then had the sudden death golden goal, but what a disappointment that turned out to be; the ball was thrown in by the ref and the Milan players were straight on it and scored before London knew what hit them, all over in a flash. Oh dear, that called for more Pimms!

Then it was time for the final, Argentina V Coutts Abu Dhabi? Unfortunately this game

was a bit one sided, Argentina walked away with the goals and Coutts could do nothing in response still it was a very entertaining afternoon, but it was not over then. We all were driven by the hotel parking valets in a fleet of golf carts for a party around one of their pool complexes by the beach. We arrived in the nic of time to commander a nice table with comfortable chairs and enjoyed canapés washed down with wine.

During the afternoon we met up with one of Jane’s friends, Nicky, who is also new to Abu Dhabi and she spent the afternoon and evening with us. I think she is also struggling to get into the Abu Dhabi cultural way of life, and she is thinking of staying here for 5 years, 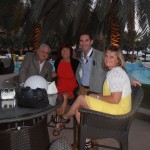 A steady drive home with Jane at the wheel as there is a no tolerance drinking and driving policy here and as Jane rarely drinks, that was good, thank you Jane.

Into bed at a reasonable time as Dave has to go to work tomorrow, Sunday is a normal working day!,