Oviedo is the administrative centre for the region of Asturias in the north of Spain about 20 miles from the Bay of Biscay. The region of Asturias was a kingdom that has history stretching back to eighth centaury and the ruler at that time; “Pelagius” won a famous battle around 722 AD. The significance of this battle was that it was the start routing out of the Moors from the Iberian Peninsula and encouraging Christianity in its place.

Today was split into 3 definitive parts, firstly we had the cultural part where we visited Fernando Alonso’s museum!!!!! Then the touristy bit followed by the gourmet part.

After another lay-in and a leisurely breakfast we headed out to Fernando Alonso’s museum, a 10 minute, “wet drive” away. 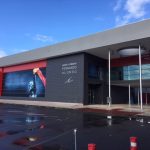 What we have come to visit 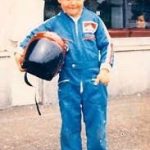 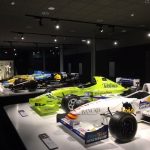 Fernando Alonoso” built specially and dedicated to his racing career. The contents of this museum cover his exploits as a racing driver from when he first 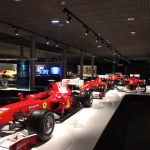 started in Go Karts at the age of 3, through the various single seater formulas’ including the Minardi he drove his first F1 race in: Australia 2001, up to the end of 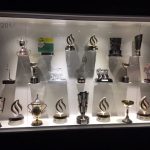 last season. This is his collection of cars, Trophies, Helmets, 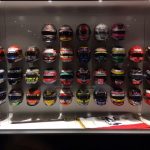 Most F1 Drivers have donated their helmets

racing suits, shoes, gloves and other memorabilia, however pride of place goes to the two Renaults he won his two world championships: 2005 and 2006. 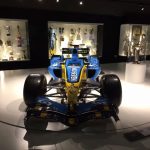 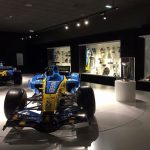 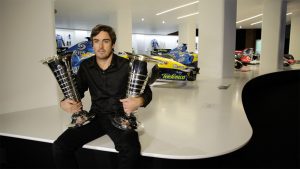 Alongside this personal museum he has a world championship Go Kart track, designed to incorporate many of Fernando’s favourite corners from Grand Prix circuits around the world. If this wasn’t enough, adjacent is a golf course so one could spend a day there!!!!!

The largest “single marque” in the collection are the 5 Ferraris he drove between 2010 and 2014; bright red they light up the place. I have to say the current Honda McLaren’s weren’t exactly the centre of attraction!!!!!! The only missing car as far as I was concerned was the Indianapolis 500 McLaren Honda he drove in this year’s Indy; perhaps it will join the collection after this season has finished. 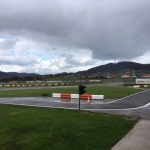 Following a nice cup of coffee in the museum Cafeteria 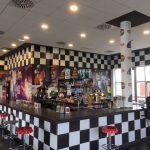 overlooking a wet golf practice area and Go Kart track we headed back to our hotel. 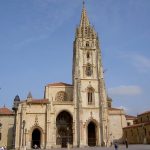 Christine worked her magic again, our hotel is right by the old medieval town. Out of the Hotel door, walk round he corner and there we are, in the main 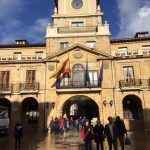 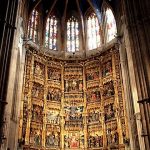 around. We wandered all around the old town in the rain though we were fortunate as the hotel loaned us an umbrella so didn’t get too wet. Being around Saturday lunchtime the area was fairly busy with families taking a stroll before deciding where to have lunch, as indeed were we!!! 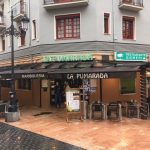 What a good place to eat

After sufficient “wandering” we decided to eat, not in the old town but a street outside that was full of restaurants   After walking up and down a few times undecided as they all looked very good and busy, we eventually chose one called “Sidra Pomarina”, It was warm, friendly and very busy but we were fortunate there was a table immediately available. Not being in a hurry we stalled the ordering; first drinks then later a starter and after we’d eaten that, we ordered our main. This method had the desired effect; we managed to spend a couple of leisurely hours lingering over our meal without blatantly occupying a table that others may be waiting for.

The first thing we noticed was how the waiters were pouring 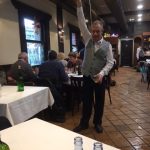 what we thought was beer from a bottle. They held the bottle high in the air in one hand and the glass down by their side with the other and poured. Naturally some went on the floor, this probably accounted for the floor tiles being sticky, but surprisingly little. The glasses weren’t filled to the top, just enough for a slurp or two after which, the whole procedure happened again. Eventually we asked what it was in the bottles and were told it was cider, of course the restaurant had “Cider” in its name and it was the house “party trick”

We tried for a Menu del Dia but were ignored and given an A La Carte Menu, oh well it is Saturday I suppose so studied the menu: well what choices, our mouths drooled, well mine did!!! So eventually for our main we settled for a platter of steak for two, one that comes un-cooked you cook it on a hot stone on the table and I have to say the meat was superb and naturally cooked to perfection.

After the meal we strolled back to the hotel and had a few games of Phase Ten before going out again, however it was so cold, wet and miserable, we stayed in the room playing more “Phase ten”: tomorrow it’s the ferry back to more cold and wet in the UK!!!!!

This entry was posted in Europe, Spain. Bookmark the permalink.