After another good nights sleep, we woke up to a dull and cloudy day which caused us cause for concern as today Mark, Paula, Tyla, and Ashleigh were coming on board for the day, and though they didn’t know it, to help us through the flight of locks; all 17 of them!!!!!

We skipped breakfast as we had arranged bacon baps for everybody when they arrived, in the mean time we prepared the boat for the “voyage”; all 4 ½ miles of it to Gayton, where we would part company after a Sunday Lunch at the Walnut Tree.

The family arrived around 1000hrs, delivered by Derek, Paula’s Dad, ready for their ordeal!!  We all enjoyed our bacon baps before we got underway.  The day was still dull and cloudy but at least it wasn’t raining. As we headed of towards the first lock, fortunately this wasn’t for a mile or so; everybody had a short “cruise” before the locks took over.  Travelling along the canal gave everybody the opportunity to see local familiar places from an unfamiliar angle and of course see the dilapidated remains of some of Northampton’s industrial past.

Soon after travelling under the M1 motorway we arrived at our first lock:  Christine, the lock Captain, took control of the team of “volunteers” and showed them how the locks worked and what had to be done and in which order things had to be done in.  This first lock was not part of the flight so we had the time without any distractions, to perfect “team co-ordination”.

Moving further along the canal and round the next bend and we came to the bottom lock in the flight.  We had to wait, as there was a boat already in the lock going up to the next level.  Eventually they were out of their lock chamber and heading towards the next lock in the flight.  We emptied out their water, drove in, filled the lock, and out again at the next level only to see the boat in front still waiting to go into their chamber; what had they been up to we asked ourselves, they should have been coming out, just as we were.  Our team performed like professionals and again, after the next lock we were waiting behind the boat, so approached them to see if they would let us pass, explaining we had to be somewhere!  This boat was manned by 3 elderly men, one who owned the boat but was giving it to his brother so wasn’t too interested in what was happening, the brother (new owner) and his crew “mate” didn’t know the front of a lock from the back of it, hence the slow speed.  Anyway, they allowed us through and off we went.  We got through the next 2 locks before they even got through 1.  Had we stayed behind them we would have missed our table booking at the Walnut Tree.

Everybody mucked in, Ashleigh amazed us with her strength; she managed to close one of the lock gates that Christine couldn’t manage!!! She also took the helm for a bit though at 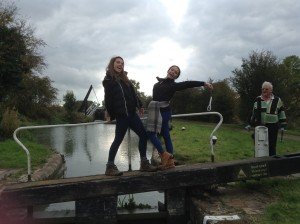 one moment she turned about to look at something and we headed towards the reeds growing at the side of the Canal.  Tyla marched between the locks in the flight armed with the lock handle; not too sure she enjoyed using it along, as several of the paddle ratchets were very greasy and I don’t think Tyla wanted to dirty her hands!!!  Mark worked his socks off and Paula supplied all the moral support needed.  On this occasion when we did the flight of locks, she drove and I walked and did the locks; burnt off lots of calories I hope.

As we travelled up the flight we met several boats coming down but everything went perfectly and we made short work travelling the flight arriving in Gayton with sufficient time for a couple of Gin and Tonics before we walked to the Walnut Tree.

from various “boutique” distilleries; naturally I had to join in.  Additionally, tonics have also taken off, “Schhhhhh” doesn’t do it these days, and so I bought some “Fever Tonic Water” tonics to go 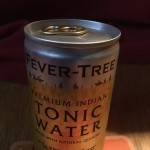 with my Portobello gin.  I am not too sure the experience did anything extra for me, perhaps if I just had a pink gin or even gin on its own, things would have been different. 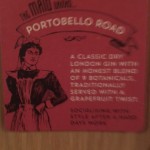 Time had come for us top take up our table reservation where we enjoyed a Sunday Lunch, albeit mid afternoon, with all the trimmings.  Mark and I declined desert: cheeseboard was our choice washed down with several glasses of Port,

Derek arrived to collect Mark, Paula, Tyla and Ashleigh after a very enjoyable and hopefully not too tiring a day. We said our goodbyes they drove off and we walked back to the boat. We stopped where we had moored earlier in the day at the junction of the Grand Union and the Northampton Arm of the Grand Union.  The other bonus was, it didn’t rain at all during the day!!!!!