We awoke early so instead of having tea in bed, we decided to get up, eat breakfast and away. We have a long day today, as we want to get off the River Nene. We left at 8.00am, Geoff wants to go to a pub he used to go to that’s why so early! still we have 12.5 miles and 13 locks to do they will be the killer. Most of the locks on this River are guillotine style which are those heavy plate ones, but at least there are no wheels to turn, just push buttons. 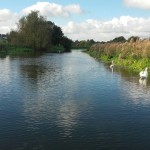 The weather today was beautiful, sunny and crisp, we have been so lucky, the trees are gradually turning golden brown, if I miss one 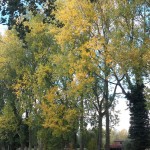 thing in Spain, it is the beautiful scenery, and of course the family.

We finally arrived at the Britannia Inn at 2.00pm, I thought we might be too late, but we managed to moor up, despite someone telling us that it was too shallow, the Robertson’s were also there, so we sat in the sunshine enjoying our drinks and chatting to them, we also had a starter of bubble and squeak, slice of bacon, poached egg with hollandaise sauce, very nice.

Later we moved on, and all of a sudden it poured with rain, we both got 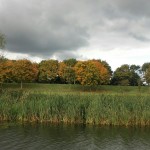 soaked, we were also in the lock so had to keep going, never mind, at the next lock we met up with the Robertson’s again, and we continued through the locks with them, stopping at Morrison’s for some odds and ends,

It’s 5.00pm we have at last arrived, I am shattered, we are off the River Nene yippee!!, back to normality, we met some walkers and chatted to them at one of the locks, and they said in all the time they had been walking they had never seen a boat on the canal, the fishermen said the same!, today they had two boats.

I cooked dinner, and early to bed I think.