The bus came along but turned out to be a shuttle only!! we then changed onto the main bus, if there was any difference between the buses, we didn’t see it, maybe the driver was going to his break!!!!!! 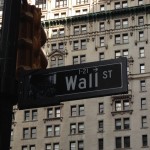 Anyway, back on the Downtown bus, our guide was from the Dominican Republic, he had a fairly heavy accent, but, he was able to talk in numerous 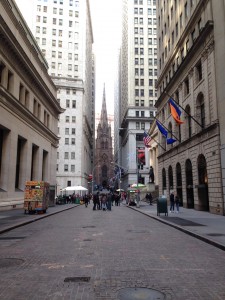 languages, not only the usual European ones, but Russian and Chinese to name but two.  The other thing was he said he recognised us, probably because we didn’t tip him last time, who knows.

We had thought we would go down to the Hop-on Hop-off ferry but as it took so long we had to abort that plan as we had to be at Circle Line Tours Pier.  We had tickets for their only tour of the day that circumnavigates the Island of Manhattan which leaves at 1200 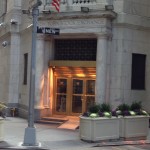 hrs. So we got off at Battery Park, the most southern tip of Manhattan, had a quick look around then found a cafe for breakfast then headed into the financial district and walked along Wall Street.

Arriving at the end of Wall Street we hailed a cab to take us to the Circle Line Pier. There pier is adjacent to the Intrepid Aircraft Carrier museum we went over the other day, but more importantly, the other side of this carrier was a NCL Cruise ship.  We had been wondering where the cruise terminal was, now we know 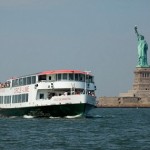 Liberty.  The bonus of today is that the sun was shining, though it was very cold and made worse by the wind chill factor, still the boat was far from full so there was plenty of space to walk around, both inside and outside.

The description of the tour is best summarised by the brochure, the extract is below:- 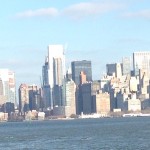 “The Best of NYC Cruise is a relaxed and refreshing cruise as you discover the secrets of New York City. You’ll circumnavigate Manhattan Island and see it all. View 3 rivers, 7 major bridges, 5 boroughs, over 25 world renowned landmarks and, of course, a magnificent close-up of the Statue of Liberty.” 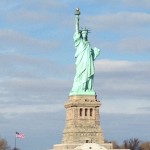 good photo shot.  This manoeuvre was announced over the PA before we arrived at the Statue to stop people moving accross and blocking others 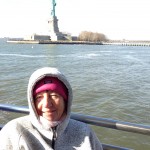 Christine, (cold) With The Statue of Liberty in the background

views, apart from us, nobody took any notice and they all crowded to the port side, but as we had seats right by the starboard side rails, we waited ’till the boat changed its aspect And had a brilliant view!!! 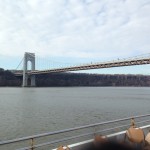 Part of the George Washington Bridge

Seeing Manhattan from the water completed a very enjoyable appreciation of New York, though there is still a lot more to see and do, so hopefully there will be a next time.