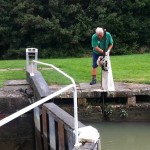 Up quite early, quick breakfast and we were off, we had moored next to Phil and Dorothy, so with Dave, Jane, Dorothy and me we opened the locks, I have to admit that Jane and Dave did the most, 16 locks completed in 2 hours 10 minutes, apparently we missed the record by 10 minutes, but we were just glad to complete it. Amazing site, and the best news was at the top we had a cafe, that did fantastic bacon and egg rolls, worth the trip. 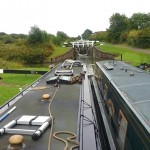 We then continued on, not realising that we had a few more locks before we got to the top, five more locks and we arrived at Devizes for a quick wander around the town, I bought a steamer to make cooking easier, and a magnet that shows all the locks. At one point the dogs were so excited to get off the boat they both fell in, both Dave and Geoff struggled to get them out, as it was a high bank.

When we got moving again, it was decided that Jane, Dave and dogs would run back for the car, and meet us at The Barge Inn Honeystreet, they would leave the car there and then join up with us, somewhere on the canal. We were left with Mia, which was lovely, until I had to open a swing bridge, couldn’t leave her on board, as we were frightened she would do something silly, so I jumped with her, scary but I did it, I opened the bridge, and then some kind lady closed it for me, whilst I got on board again, glad that only happened once. Mia was great, we watched the swans, ducks, birds, and she was so excited when she saw Mum and Dad again. 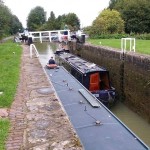 We moored up at the canal side pub, which was once a slaughterhouse , a bake house, a brewery and a grocers. Real ale and food served, which I had fish and chips, they were lovely, Geoff and Dave tried the local beer, which they seemed to enjoy. Another good night sleep, even Mia didn’t wake until 8am, must be all the fresh air and exercise.