Meandering around the Keys

We did our exercises before breakfast, then headed out for a drive.

We went towards St. Petersburg, then headed onto the keys, there was a road we found, that had water both sides, with the vast bridge called Sunshine Skyway Bridge, <'br /> 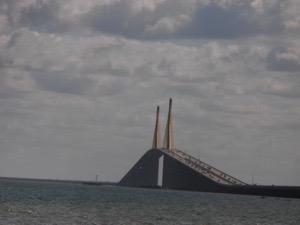 we had to pay a toll to go across, but it was worth it, we then followed this road to Tierre Verde, which was basically a reservation area, where you could enjoy the beaches, and also launch your boat, really liked this area, when they wanted to charge us 5$ to go in the park, we told the guy we were lost, and he kindly showed us where we were, so he let us turn around and didn’t charge us, we had seen everything anyway.
We headed for a place called Treasure Island, we could have paid for parking but decided we only wanted to look, not stay, so Geoff parked, whilst I went for a walk on the beach. The sand is lovely and soft and white, and because the beaches are so vast, not overcrowded, unlike Spain! 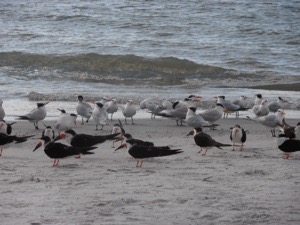 . The birds were not worried that I was there, they just carried on, further down the beach a guy was fishing, and this heron had befriended him 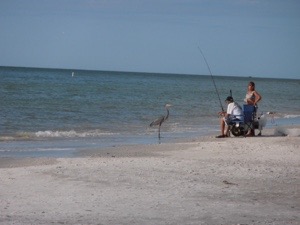 We worked our way along to the top of the key, most of the places looked the same, we tried parking in one spot, and a guy with a tow truck was just about to tow a car away, cos it’s owner was not in the shop they were supposed to be in, not sure how they knew, but we didn’t want to risk it.
The inland sea is very pretty area too 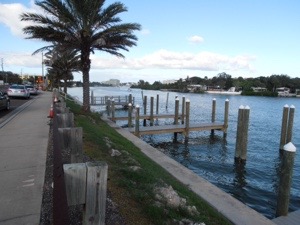 , I think if I lived here, it would have to be a house with a boat at the bottom of garden, they really looked very picturesque.
To get off the Key we had to go across a small bridge, and guess what we had to wait for the boats to go by 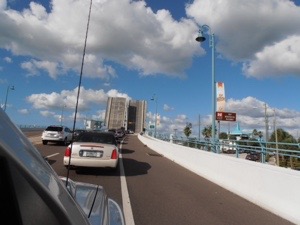 , they have a lot of these lifting bridges, we then had to go back over the big one again 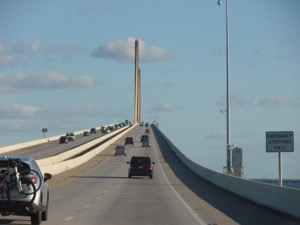 .
Mike cooked dinner, and we then played crib and sequence, I won at crib, but Jan and I lost badly in the sequence, which isn’t bad considering we have beaten them at everything so far this holiday. Well done boys, so glad you are improving at last.