Bella and Sooty for some reason woke us up at 6.30am, think one of the other Motor homes were leaving early. So I took them out for a lovely walk, whilst Geoff prepared for us to leave. Quick cuppa, then away by 7.30am.

Stopped for breakfast on route, we only have 119 miles to go; we are heading for La Grande-Motte which is on the coast near Nimes. We arrived about 10am, and it was 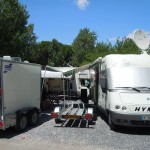 Camping in the summer!

another crowded site, but this time, a lovely French Man smiled and said he could find room for us, which he did, we unhitched the trailer, and Geoff parked ‘Rosie’, we then found out that the site we had been given is for three vans not just one, so we had to move around again. Well when we arrived we thought the site was crowded, but by 2pm we were packed like sardines, in fact not sure how we can escape, until others move. 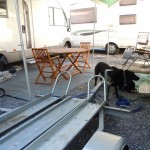 We sorted ourselves out, had some lunch, then we went for a ride on our bikes, we followed the signs to La Plage, the beaches went for miles, and there was no spaces to park, not even for bikes, we then noticed that they were parked on the cycle tracks, so that is what we did. We walked along the waterside paddling, a lot colder than Spain, but still 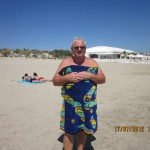 Our new beach towels, thanks Jane

lovely, the beach was clean,with white sand, and you could see for miles, crowded but it is summer, and a week-end.

Back to our bikes and we went into the city centre, down to the Port, lovely marina, with unusual buildings around. Typical seaside resort, very clean, with bouncy castles and lots of bucket and spade shops.

On the way back we stopped for a wine or two, which was lovely, accept they put ice in it!! A very pleasant day.