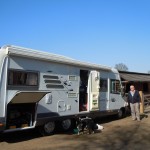 The day has finally arrived 21/3, we were both very excited, the sales guy had phoned a couple of times to delay collection, but it didn’t dampen our spirits.  Even though we had bought ‘Hector’ fourteen weeks earlier, he was still not ready, so we completed all the necessary paper work before having a run down on how everything worked. The first thing we spotted was the outside shower was in the wrong place, they had fixed it right by the door, so if we wanted to use it, we would be having a shower in the outside lounge where the groundsheet would be, not a good start, Geoff was getting very cross, several other things we struggled with, but the final straw was the sat/nav/radio did not work, oh dear! I had left at this point, as Geoff was going to follow me, he telephoned me to say come back and pick him up. Apparently he had lost his cool with the salesman.  Couple of hours later, we received a phone call to say it needed a replacement, which they could fit by Friday.

Geoff sent a long email, stating all the things he was not happy with, and when we arrived on Friday, everything was sorted, and they had offered us a full refund on the shower unit, so we parted good friends, and they apologised and hoped we had a good trip.

Off to Tom and Kathleen’s to pick up everything we had stored there, and after a quick lunch we left for Essex, I towed ‘pinky and perky’ with the car, and Geoff drove ‘Hector’, we stopped for diesel, and gas (LPG) but failed to get any gas in, no one seemed to know how it worked, so we pulled into the next station where we managed to fill both tanks.

We put the bikes in the garage, and left ‘Hector’ at the stables, where we have spent the last few days emptying boxes, filling shelves,  making beds, with all the stuff we bought over from Spain, we are both shattered, and realise once again, we have too much, so we have packed some boxes with things we do not need, and will leave them in Spain when we get there in June.

Where is this lot going to go!!

Finally we are ready for our first trip, which will be to the New Forest, hope the weather is kind to us, give us a call, if you are 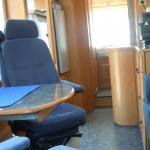 coming our way, all visitors will be welcome.