We checked out of the Hotel after breakfast, and headed south to Gaterland.

We arrived about 10.30am in time to see the first show, which was called “close encounters” the guys who were doing it, we’re very funny, he picked some boxes out and left them in the audience, after a few initial facts, they came into the audience to get people to participate. One of the ladies went down, and had to keep her hands open and eyes shut, and he was about to put a tarantula in her hand when she screamed, and ran away, I don’t blame her. These two tarantula’s were quite big, not something I want to hold.
After several holding experiences, like cuddling a Boa restrictor, and a couple of smaller snakes, we moved on to wait for the wrestling with the alligators. 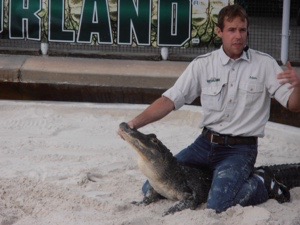 all the guys who compare the individual shows were full of wise cracks.
We meandered around the park looking at all the animals and birds 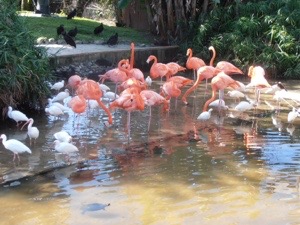 There were white alligators, which were very rare 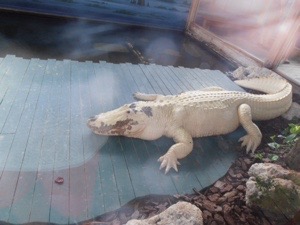 , they also had one call Chester, apparently he would eat the local dogs, so they rescued him, but he didn’t mix with the other alligators, so Chester has his own pad. 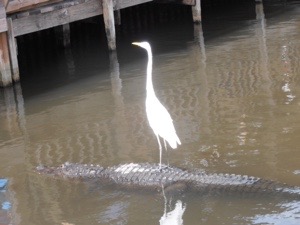 the next show was feeding time, where they played games jumping up for their food etc., 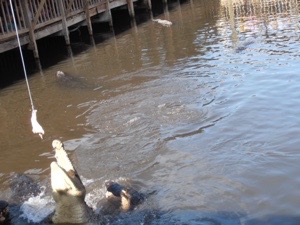 We went on the train around the park, and then decided to leave and head for home. We were trying to get back to the house without using the motorway, which was fine, but the road signs are a bit confusing at times.
We stopped at Wendy’s for lunch 3pm, I was starving, I asked for a hot tea, but they said they didn’t have any, so we declined the meal, and went onto Lakeland, where we found a lovely restaurant called ‘Harry’s’ , it was happy hour so I had two glasses of wine, I was very pleased we could not get tea at Wendy’s the food was lovely.
Eventually we arrived back at house, I was shattered, so after a catchup with Mike and Jan, I had an early night, I was asleep within seconds.