After an un-godly start; would you believe it was still dark when we got up, I have only seen dark at night, not in the morning!!!! We arrived at the airport and naturally caused havoc; didn’t know where to go, couldn’t understand the lingo and this international airport were limited to English speakers, still it paid off when Christine used her charm and they sent us down the “need help” aisle.

Flight full but OK ‘till we landed, with a bump, and when I say a bump I mean a bump, I was surprised the tyres didn’t burst.

This airport reminded us of Murcia, small, all outside and only a few ‘planes. Anyway, luggage collected and our man, standing, waiting with our name on his card was there to meet us. As an aside, when we sorted our holiday, “Harry”, (our agent), booked us for in for a 3-night stop with sightseeing. Our Driver, “Leonardo”, who was at the airport informed us he was our driver from the time he collected us to the time he deposits back at the airport for our onward flight; wow!!

He dropped us at our hotel with an Italian name, and after we checked in, wandered across the road to a large shopping mall, as we needed some, but not too much, exercise and water. 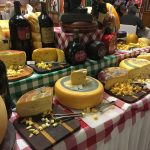 Every type of cheese you could wish for

After relaxing we went down to dinner in the Hotel to be confronted by an Italian version of a Churasscarias. What a fabulous 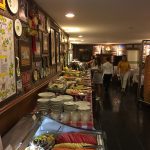 evening we had. Apart from superb Pasta dishes permanently being brought to our table, the spread of Salads and the huge variety of cheeses, we were entertained by a duet singing Italian songs and a couple 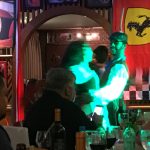 prancing around the room to the music. We went into the restaurant tired and looking for a quick get-away and 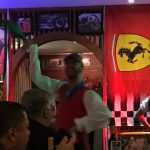 actually stayed most of the evening.

We were met this morning by Leonardo and off we set to the falls. Firstly I am quite surprised how big the town of Iguassu is, it has a population of around 300,000 yet people really 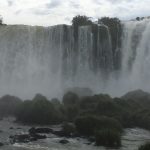 only come here to see the falls.

The first European to record the existence of the falls was the Spanish Conquistador, Alvar Nunez Cabeza de Vaca in 1541. These waterfalls are the largest waterfalls system in the world. The 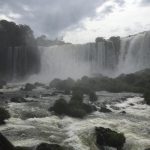 falls divide the river into the upper and lower Iguassu and rises near the city of Curitiba, which is actually to the north East of Iguassu. For most of its course, the river flows through Brazil; 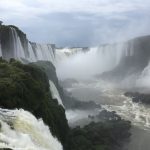 As we get closer the falls become more spectacular

however, most of the falls are on the Argentine side. Below its confluence with the San Antonio River, the Iguassu River forms the boundary between Argentina and Brazil.

To get to the falls, you enter the “Parque Naconal Do Iguacu” then drive a further 10 Km’s to get to the drop-off point. Now we followed the 1 Km man-made path to view the 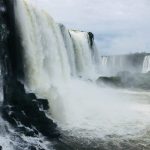 Side view on, the sound of the water was amazing

various angles of all the different falls. Each view we stopped at was breathtaking and though there were many people we could still get to the fence to get clear views 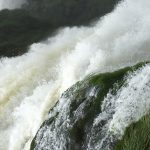 One of the side shuts.

for pictures etc. Our guide, though not walking with us; he went ahead to meet us at the end of the walk, told us that as we progressed along the path our views would get more spectacular, and he was right. When we reached the end and walked along the walkway into the centre of basin, called the “devils throat” we were lost for words. Christine had done Niagara Falls but had to admit these were more spectacular and this was confirmed when I looked up the differences on Google. 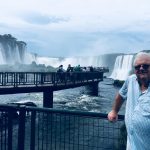 mounted video camera; this has to be my next “must have” item!!!

After spending well over 1½ walking and enjoying the views with hundreds of Raccoons wandering around our feet, we headed for the lift to take us up to street level where Leonardo was waiting for us. 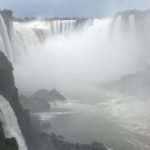 I keep using the word amazing, that’s because they truly are 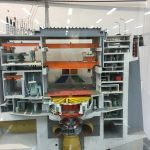 Model of how it works

We were on a high and didn’t want to just go to the hotel so after talking over the various options available for an afternoon tour, we agreed to meet up again at 1400hrs and be 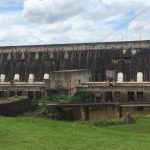 The shutters where the water goes down are massive

taken to the Itaipu Hydroelectric Dam. This Dam is the Largest hydroelectric power plant in the world, Itaipu is the current world record holder in power generation and is considered one of the 7 wonders of modern engineering. 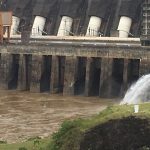 Tiny part of the area

Built on the Parana River, the seventh largest river in the world, between Brazil and Paraguay, it is 8 km wide, has a maximum height of 196 m, and a lake of 1350 km² and eventually becomes the River Plate and heads into the Atlantic; we were looking forward to our visit. 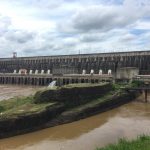 Another view of the Dam

When we arrived we got aboard a double decker bus that circulated the site, rather on the same lines as a “hop-on hop-off” sightseeing bus in other cities though there were only 3 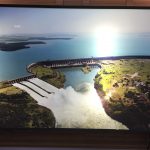 View of the three spill shutes, we were lucky they were all working

stops to do this!!   Still it is a site to behold and because it is “that” time of the year, the river was swollen and all 3-spill gates were open and the torrent of water was enormous, what a sight and well worth the 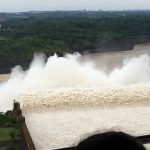 View from the plane, another amazing site 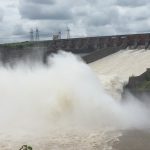 After leaving we were knackered, yet again; it must be the heat as much as anything causing us to be pooped before the evening!!!

The hotel restaurant is closed tonight but they have an “Express Café” where we can get food. Last night we enjoyed a bottle of “Malbec Grand Reserva” and we ordered another bottle for tonight, superb to complete a superb day.

Tomorrow we visit the Argentinian side of the Iguassu falls