Refreshed after a good night’s sleep we headed down to Breakfast, oh dear we can already feel the weight going on and we have another 13 days of this!

After breakfast we went on a orientation tour of the “Celebrity Infinity” trying to get our bearings and finished up at the Italian Coffee Shop where we not only enjoyed a super Mocha and Tea, we witnessed a staff “spat”; they were caught be surprise with too many people arriving and insufficient staff to keep up with demand. The waitress’ were taking the orders (sales) but they were let down by the “production” team and of course the waitress’ got it in the neck from the guests and were harassing production!!! I have to say things got sorted fairly quickly when re- enforcements arrived to increase production, including the very nice Indian barman from the Martini Bar: Everyone here seems to be multi tasked.

It was now time to get swimmers on and visit deck 10 where there are two outside pools and two Hot Tubs. We also witnessed the weekly volleyball challenge match between the ships Officers and the ships Hoteliers, the Hoteliers won, apparently they never lose! The challenge then went out for guests to form a team to play the Hoteliers. Several volunteers jumped into the pool, including me, and we gave them a good run for their money only losing by 21:15, better than the Officers!!!!

Next it was one of those stupid competitions called the “poolside Olympics”. Two teams of 8 adults; USA guests V Rest of the World guests. Again I was in the ROW team. 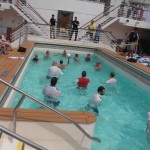 First test was to throw a bean bag through a hole in a board, USA won, 2 to 1 after extra time! Next was a “Synchronised 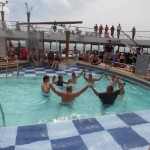 Swimming” event. We had had about 5 minutes to sort this one out earlier and fortunately our “crew” organiser gave us some tips. The judges were all the rest of the guests around the pool and they judged us (ROW) to be the winners, so we went into the last game, equal. Everything hinged on the outcome of this. A dingy was placed into the pool and first 1 person jumped in, paddled to the end of the pool and back again where upon a second team member jumped in and the two did the paddling, then 3 – 4 – 5 and so on until there were all 8 members of the team in this rather small dingy. After two very 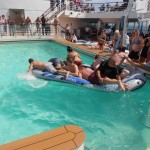 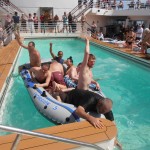 the rest of the world were the fastest and won the Poolside Olympics and we each had a “gold” medal, silver went to USA, yeah!!!!!!!

We enjoyed more swimming and lounging in the sun before we retired to our cabin to dress for dinner, tonight is our first Formal Dinner, black tie and posh frocks. We are also booked to dine in the SS United States restaurant, at extra cost I must add!, but before that we had a date with the Martini Bar and our friendly Indian Barman. 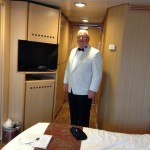 Whilst enjoying our drinks we got chatting to an American who lived in Buenos Aires and who has an apartment which he suggested we should rent from him next time we visit BA, oh yes I think there will be a next time, we both enjoyed what we saw and experienced that we certainly want more. 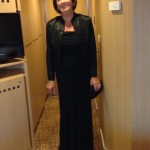 waiting on our every need. This is marketed as a four course “gourmet” restaurant offering a level of service only experienced by Guests on Ocean Liners of a bygone age with food to match. We thoroughly enjoyed our starters then experienced a superb Chateaubriand, cooked to perfection, carved on a trolley next to our table and washed down with excellent wines. Unfortunately now we were “stuffed” we couldn’t manage the next two courses, Cheeseboard and Flambé deserts, oh dear but we have booked again and if we go without lunch we make all 4 courses!!!!!

After dinner we went to the theatre, firstly the Ships Captain introduced all his senior officers and hoteliers and this was followed by an amazing showcase of songs and dances from around the world. It went on for one hour non stop! what energy as it was only one set of performers that did everything with very quick and slick changes.

By now we were exhausted but happy so of to bed as it was around Midnight, well past our bed time, tomorrow is another day a sea.