A slow start to the morning, breakfast as usual then some decisions to make, where should we go. Swimming off Copacabana sounded good but then Christi 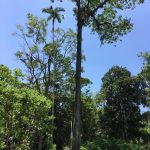 Geoff hugging his Brazil nut tree, took us ages to find it

Before I go on, I’d like to mention a very nice local drink I am enjoying, made from cane sugar, a sort of rum with flavours; mine are honey and cinnamon, very nice. I enquired if it is 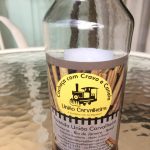 Back to today.   Our chosen mode of transport was to be the 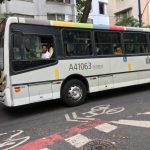 local buses, and number 584 was the one. We caught it 2 blocks away from our hotel, and it took us to the entrance of the Botanical gardens. It was an interesting bus ride I have to say. As we entered we paid the driver the fare, 3.40 Reals each, (about 76 pence) and then we walked through a turnstile and all this as the driver was pulling away. 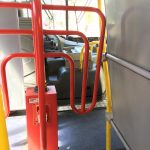 They don’t let you get away without paying here

Accelerate hard, brake hard, accelerate hard, brake hard and whilst doing that, he weaved through the traffic; now you might think we had a lunatic for a driver, but no, they were all at it, the start of a F1 race had nothing on these drivers. The only blessing was that the seats were padded, a little!!! Still after a very hairy ride we arrived in one piece. 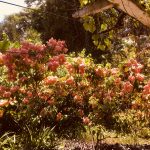 Not what they are but they were very pretty

the Public. The park lies at the foot of the Corcovado Mountain, far below the right arm of the statue of Christ the Redeemer. 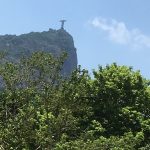 Christ the redeemer looking over us

Not being too interested in gardening I was a little apprehensive about this; walking in the heat looking at plants I had little or nothing in common with, didn’t exactly fill my boat, still it had to be done for Christine’s sake but 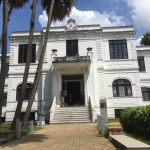 Entrance of Museum of environment

I did insist on a cup of coffee before we started.

We paid our entry fee and in we went and I soon realised it wasn’t a garden centre type place at all; it was basically a controlled environment for all the species of trees and other

plants that are found in Brazil. These gardens contain more than 6,000 different species of tropical and subtropical plants and trees, including 900 varieties of palm trees. As we walked round we picked up on a few things in particular. The first was the pernambuco tree; apparently the wood from this tree is the best wood available to make high-class violin “bows”. In addition to this, the wood yields a deep purple-red dye, which was in high demand in 17th century Europe. I also wanted to see the Brazil nut tree. Normally nuts grow individually such as hazelnuts and walnuts etc., but Brazil nuts grow in a husk, rather like a brown coconut, the sort one can see at a fairground in the UK. We found the “one” Brazil nut tree but none were visible to see, but it was a very tall tree; what a shame.

The only Brazil nut tree in the park 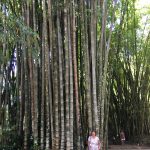 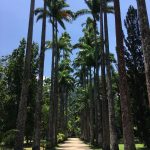 Amazing to see so many palm trees[/caption]which form the “Avenue of Royal Palms” leading from the entrance into the gardens. These palms are all descended from a “single tree”, the Palma Mater, long since destroyed by lightning. If we were going to the Gardens this was on the must see list, and how spectacular this palm tree lined avenue was. These particular palms have no bark as we know it, they are just plain trunks with foliage at the top, oh, by the way, the top is 50 meters above the ground; fabulous. Because of their height, some of the avenue has large stainless steel mirrors angled so you can see the tops without bending backwards, I hasten to add; we “looked” up.

We were a little disappointed with the Orchid house, perhaps it 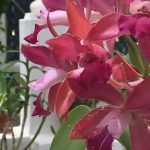 Very pretty but only one or two in flower

is the wrong time of the year but we were 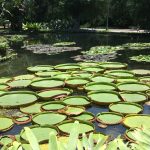 impressed with the giant water lilies though I did get a rocket from one of the stewards for standing on the grass to get a ‘photo!!!

Only about 40% of the park is cultivated, the rest being part 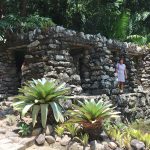 Old stone building not sure what it was used for

of the remaining Atlantic rain Forest and it rises up the slopes of Corcovado. The park is protected by the Patrimônio Histórico e Artístico Nacional and was designated as a biosphere reserve by UNESCO in 1992. 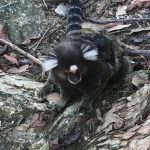 So cute, a bonus too as we missed them before

Whilst wandering through this park we came upon the smallest monkeys we have ever seen, “The Tufted Ear Marmoset’s” we think. There were a pair sharing a banana and a, presumably a mother, with the tiniest baby on her back. They were so tame, there was quite a crowd around them all taking ‘photos but they didn’t flinch. 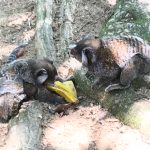 One had a baby on its back it was so tiny, hasn’t shown up in picture 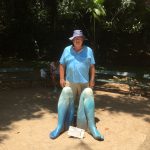 As I said at the top, I wasn’t particularly enamored at the prospect of visiting these gardens but I have to say I thoroughly enjoyed it, thank you Christine for suggesting this visit. 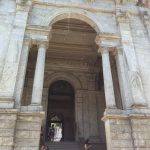 Next we were advised to visit the “Parque Lage”. Parque Lage is a public park in the city of Rio, located close to the Botanical Gardens. The land was formerly the residence of the wealthy industrialist, “Enrique Lage” and his wife; the Italian opera singer “Gabriella Besanzoni” (1888 – 1962).

To get here we took another bus as Google maps told us it would take 36 minutes to walk, but as I have said before that doesn’t take the “heat” into account. Straight onto the bus, same fare, through the turnstile, hanging on for dear life until planted in a seat. 5 minutes later we were outside the park. This house was quite something, the courtyard in the middle of the building was a swimming pool, though it hadn’t 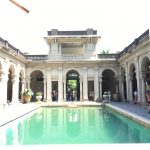 got a modern pumping system, the water was rather green. We had a good look around the outside then headed off for the bus back to our hotel feeling very happy with our day.

I looked on Google maps and it suggested the bus we arrived on actually went in one big circle so we crossed to the bus stop opposite. Our bus arrived and before we parted with the huge sum of 6.80 Reals, we checked with the driver if this was our bus; no he said and told us the bus number we wanted.   After an inordinate amount of time our bus arrived and we checked again, no said the driver we needed the 583, on the other side of the road. Oh well here we go again but this bus came along fairly quickly and after checking with the driver that it was OK, boarded. Because the traffic was getting heavy due to the time, he didn’t take off like a maniac so we got into our seats un-aided this time!

Google maps told us when to get off and 5 minutes later we “should” have been in our hotel, but were waylaid by activities going on in the local park. We went to investigate and watched numerous groups of 4’s playing cards and draughts. Draughts we knew but the card game baffled us, it seemed as if each table of 4 players were playing with 4 packs of cards; as our Portuguese is non-existent and very few people speak English, we decided not to ask.   As we were leaving the park 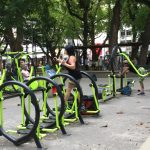 Keep fit centre in the park

we were stopped dead in our tracks by a cordoned off area, firstly we thought it was a children’s play area but realised it was an adult play area, in fact it was full of various machines for people to do their work outs: no need to go to Virgin here in Rio, the equipment is in the park for free!!!!

Hotel next for a wash and brush up then out to an earlyish dinner, nothing exotic, we had all that with the cruise ship; plain and simple for the next few weeks and hopefully lose some of our un-wanted pounds.

Again another very successful day today, thoroughly enjoyed ourselves and will sleep well tonight; tomorrow is our last day in Rio.