We think we have seen everything there is to see in this area, we have made good use of the bikes, now we are heading north. Our neighbours have rolled in there blind, and moved anything out of the way they could to allow us to leave early. We were up at 6ish, I walked the dogs, whilst Geoff did the toilet, topped up with water and moved the trailer, we were set to move, ticket in the first machine, and after a struggle the barrier went up, now the big gates, well my card would not work, it was bent, and the magnetic strip had been torn!, a nice man offered to help, went to get his card, meanwhile another French man offered his, so eventually at 8am we were released from the sardine can. Hopefully Italy will not be as crowded as this, we could not even roll our awning out fully, let alone, sit outside and eat, glad we have moved on, although I have enjoyed the sites we have seen. 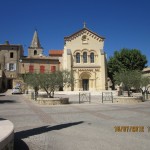 A slow trip north, has taken us to Chusclan, it is a very old village in the middle of the countryside, dating back 2000 years. We are parked in an Aires, opposite a co-operative wine producer, so we will be visiting there later.

We sorted ourselves out, lovely site, and it is free, which makes it even better, very well laid out, with all the facilities that you could need, accept electric and showers, but we can have those anyway, as water is plentiful.

After lunch we went for a long walk into the village, it is lovely here, very narrow 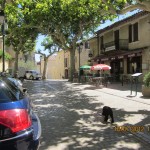 streets, pretty houses, with a couple of squares, the village has a lot of history, but it now survives on the grapes, and most of the inhabitants work at the wine cellar. We sat in one of the squares which was deserted, and had a beer, it was lovely just to sit and ponder what life had been like years ago. 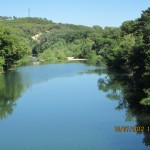 On the way back we walked along the river, we were trying to find a safe place for the dogs to go in, as the water was running very fast, as there is a weir, we decided we would explore on the bikes later, as although Bella is a strong swimmer, we did not want to have to go in after her.

On the way back, we called into the wine cellar, (that didn’t take long did it) you could taste the wine, before you bought some, so we had tasters from four bottles, before Geoff decided on 9 bottles of 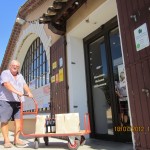 one kind, and 12 of another, we are meeting up with Mark in a couple of weeks, so he can help to drink it.

Back to the site for a cup of tea, then on the bikes to find where we could swim, did not take long, only half a kilometer away, so we will take the dogs there tomorrow.

What a lovely day, the more time I spend in France, the more I love it, especially away from the commercial bits.