After our un-expected partying last night we had a lay-in, after 9.00 before we got up and then we enjoyed a leisurely breakfast to set us up ‘till the Menu del dia we booked for 3.00pm at the same place we partied at last night. If the Tapas that we thoroughly enjoyed last night are anything to go by, we should be in for a treat. 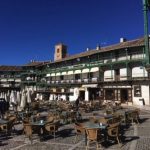 Part of the Plaza

This morning was for looking around Chinchon. Our hotel is just off the main, historic “Plaza Mayor”, the heart of the old town. Houses, with porches and balconies, surround this historic Plaza dating back to medieval periods. Many of which are restaurants with the odd tourist shop. The Plaza is actually circular with the centre doubling up as a car park, a thoroughfare, a bullring and in times past a place of execution.

We walked up the narrow cobbled streets to the “Church of 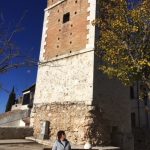 Nuestra Senora de la Asuncion” and the Clock Tower; both on the tourist “things to do in Chinchon” and guess what, both closed and locked!!! During the peninsular war, the French ransacked and burned the church of the Asuncion, which also destroyed the tower.   Next door was another church, also with a tower but the same French completely destroyed the church but left the clock tower. The result is that known locally, “Chinchon has a tower with no church and a church with no tower”.

We wonder if the locals are afraid their church and tower may get ransacked again if left open!!!!! The third point of interest on the tourist route was the “Lope de Vega Theatre”, built in 1891, named after some famous author we never heard of!!! After that we headed for the Baroque “Chapel of Nuestra Senora de la Misericordia”, this was squeezed between two buildings, very easy to miss but the same thing as earlier, closed and locked.

After more wandering about, we found our way to the main Plaza and enjoyed a coffee siting in the sun watching the council people erecting the Christmas tree, well a metal framed Christmas tree!! It was at this point the tourist train arrived, so naturally we had to do that. 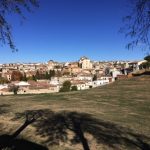 View from top by church

Yes, you’ve got it; our first ports of call were where we had just been, the church, bell tower and theatre and the hard to find church squeezed between two buildings.   The train did also take us through winding, narrow, cobbled streets so we did get a good appreciation of the old town. Riding this train was quite interesting but it needed extra suspension to deal with the cobbles, one could easily shake ones teeth out!!!! We then arrived at the remains of “Castle of the Counts” which dates back to 1520 when it was re-built after the original had been severely damaged due to local unrest with the feudal power happening at that time. 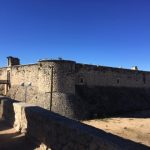 This castle has an un-happy history having been destroyed, again in 1705 during the War of Succession by the Austrian Archduke’s army and then again in 1808 during the Peninsular war, but this time by a Polish brigade, not the French. This is how it was left but though it was severely damaged, much of the castle still stands but again, closed and locked.

The train dropped us of at the Parador, The Augustinian Monastery where we are staying so we took the opportunity to go to the room for “light relief” before heading out to lunch. 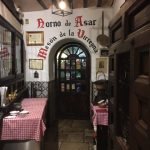 We went to lunch at “Meson de la Virreyna” (where we partied last evening) and like the Tapas last night; the food for the menu del dia was superb, though a little pricy to what we are used to. We both had a leg of Spanish lamb for our main course plus the usual bottle; excellent, what a good decision.

Back to the hotel for a siesta, followed by a couple of games 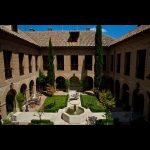 of Phase ten before venturing out for a drink and a couple of tapas. We went back to the same place but the crowed weren’t in such a party mood so a couple of Tapas and drinks then back to the hotel where we had another game of Phase ten followed by bed.

The disappointing thing tonight was, that after watching the council build the metal Christmas tree, it wasn’t lit up; perhaps they have a switching-on ceremony at the weekend.