The wind was howling most of the night, apparently it is the Mistral, and we thought it was only in the spring, but it can be all the year round. So I was awake early and walking the dogs, Geoff made the tea, and we set off on our journey.  Only 74 miles, but because we are not using the motorways, it will take a couple of hours. 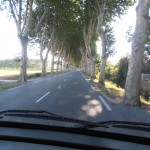 France is so pretty, we went through many villages, and saw the traditional trees lining the roads, rows of sunflower fields, lots of different colours, I love it! 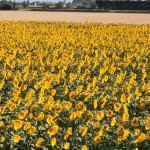 We have decided to go to another Farm today, which is organic, they have a market, which happily happened to be today.  We are near Valance, in a tiny village called Chateauneaf Sur Isere, when we arrived it was very busy, with lots of cars and people around, and we thought we were in the wrong place. 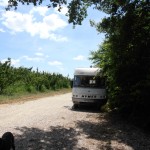 A lady came over and helped us, and showed us to the owner, who then told us where to go, another lady walked with me to our parking place, another good result.  We walked the dogs, had a cuppa, and then went to see what the market had to offer.

Wine tasting was first, and we bought two bottles of Rosé, then we went to another stand where they had chutneys, Geoff had a taste from one that was made from Olives, and I liked the fruity one, another purchase was made, we then bought some bread, and some goat’s cheese.  I then bought some plums, figs and red peaches.

Back to Rosie for lunch, an organic spread fit for a king, no wonder we are getting like porkers, but it was very tasty, especially the bottle of organic wine! 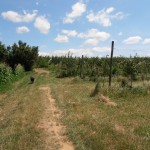 Sweetcorn to left, apples, plums, and pears to the right

After lunch I strolled around the farm, it is amazing, they have sweet corn, apples, pears, plums, melons, cob nuts, almonds, quinces, blackberries, and kiwi’s, and that is only what I spotted, there is also a field of sunflowers, which were not out in bloom yet  which was a shame. I managed to pinch a couple of red peaches, they are amazing, so juicy with red flesh, apparently they are a very old fruit, which 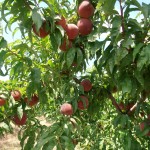 they are growing again, well recommend them. Geoff told me off when I got back for abusing the hospitality that we had been shown!! (He enjoyed the pickings though)

Geoff and I played crib, which I am at present loosing heavily, so I have put the board away, we will be onto dominoes later.

We have not worked out why the farmers allow Motor home families on their land, they do not charge, they do not expect you to buy, they just want you to say hello, you have to be completely self sufficient, but it is so peaceful, there is no one else around at present, long may it last, and the dogs get to run in open fields.