Up at a reasonable time, and we took the canopy off as we are going through the one mile tunnel again.

The Braunston Tunnel is 2042 yards, it took us twenty seven minutes to go through, it is quite scary, I had to drive, because with Geoff’s glasses he struggles to focus on the darkness. We were half way through, when we met another boat coming in the opposite direction, we both slowly passed each other, and finally reached daylight again. 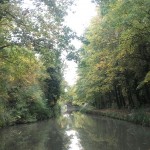 We stopped for lunch, before travelling onto Napton where we diverted onto the Birmingham waterways, still the Grand Union Canal, so the locks are still the big ones, but at least they are easy to do. We decided to stop before the Calcott locks, face those in the morning.

Had a nice dinner if lamb chops, bought from the butcher in Wellingborough, they were lovely, glad we bought them.