We were up quite early, but by the time we had taken on water, done the loo, and all other jobs related to moving, we did not get away until 10. am.  We had decided to stop 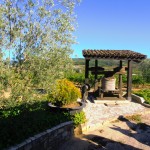 at LaJonquera so we had about 150 miles to go, we stopped for lunch, and then changed our minds, and decided to head for Sant Sadurnind’Anoia, past Barcelona, making our journey a total of 256 miles, we were having such a good trip, and I actually drove for some time, although it does hurt my hand changing gear.

Sant Sadurnind’Anoia, is where the Spanish equivalent to Champagne comes from, except they call it Cava, as we approached their were miles and miles of vineyards, 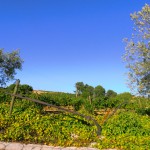 apparently they use three different grapes, and have two fermentation’s, one after it has been bottled, just the same method that the French use, but the European Union stopped them using the name Champagne.

When we first arrived, I was left to explain what we wanted, and I was greeted by this lovely smiley chap, who fortunately could speak and understand English, he said we could park anywhere, and said we could have a tasting at 6pm.  So we sorted ourselves out, and were ready in time, we were asked if we wanted a taste of wine, we said Cava, and Geoff tried to explain we wanted 24 bottles, when the Spanish lady heard that she went for help!! We are so naughty not being able to speak their language, anyway the export manager appeared, 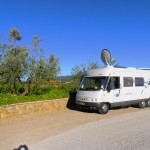 Rosie parked in a lovely quiet space on our own

and quickly took us through several tastings, after he had found out what we were going to eat with it, we tried a few more.  We both fortunately liked the same one, so we now have the bubbly for the wedding as well. Whilst we were there, we happen to try the red and white wines, so we came away with more than we wanted, but sure it will not get wasted. We paid the bill, and ended up with one of the bottles that we were tasting, and took it back to Rosie.

The next morning, we had decided to just go for home, it is 356 miles, which does not seem a lot, but our average is about 45 miles per hour, with stops of course, so everything takes longer.  The good thing is we can have a drink or weee whenever we want.  Although it was a long day, we arrived in Pilar de Horadada about 5 pm, we were going to have a curry, but they were closed, so we went for a Chinese, three courses, bottle of wine between us, all for under 15 Euros, we are back in Spain.

We then went down to the beach, but they have stopped vans down there, so we went to El Mahon, which is also on the beach, found several others parked up, so we parked for the night.  In the morning, we went back to Lo Motto, and we will stay here, until we can get back into our home on 1 November.

We left December 3, last year, and we have now done a full circle, we have seen some fantastic places, and thoroughly enjoyed the journey, we have done 10300 kms, which is 6180 miles, Rosie has been brilliant, we have had one wheel that was faulty, plus of course the snake problem, a few little repairs to be done inside, but considering we have used her solidly for six months, we think she has done very well.

We are back to England on 4 October to go to Jill’s 80th Birthday Party, a whistle stop visit to friends and relatives, then Geoff is off to Canada sailing, and I will come back to take over the house on 1November. Back soon………………………