After pitching and a quick lunch we scouted the facilities then off to the lake for the dogs’ daily swim with some walking in between. The receptionist told us to turn left out of the site and walk ‘till we reached the flats where we would find a “not so nice” tunnel under the road leading down to the lake. After several hundred meters we couldn’t see any flats only an odd house so walked across the road, jumped the duel carriageway barriers, down a track and hey presto, the lake side. Bella was straight in, 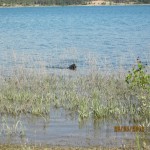 Bella being an otter in the lake

Sooty waited for a stick to be thrown, and then he was in. 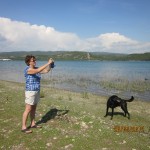 Sooty waiting patiently for his stick

We walked along the lakeside back towards the camp site and came across a lane back to the main road and what did we find, yes that’s right the tunnel. So back through the tunnel wondering where the flats were and suddenly realized the lady probably said “flags” as there were 4 flags flying at the entrance to the tunnel, just by the camp site entrance; ugh!!!!!!!!!!
A pleasant evening was had, though very very hot, back to normal thank goodness.
A lazy breakfast and morning chores followed by a day of leisure and swimming in the outdoor pool, 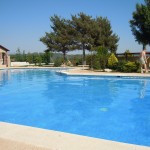 wonderful, warmish water and sunny when getting out, sheer bliss.
A nice bottle of Chablis bought from the wine fare with dinner, some television and bed.
Up early this morning as we needed to visit the local supermarket and get back before it gets too hot. We certainly achieved that goal, as we zoomed on Pinky & Perky and were in the local town before the shops opened, wow! Loaded with provisions, and we found space on the bikes, we were back to relax, for the rest of the day and swimming, again!!!.
A leisurely start to the day with relaxation before we went off on bikes to an old monastery 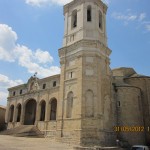 The front entrance of the Monastery at Ooda de Isabena

called “Hospedería de Roda de Isábena”, it is also a Hotel and is situated on top of an isolated hill with an excellent restaurant inside the old chapel within the monastery enclosure. We were recommended to go there and told round trip to be about 41 miles. Well we took a wrong turning and did an extra 15 miles albeit it was worth the deviation as we came over a narrow mountain pass 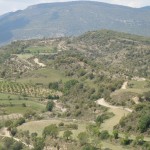 View from the top of the pass

with spectacular views though the twists and turns did give us some interesting “bike handling” training,  but beautiful scenery. This all took time, but at least this being Spain when we eventually walked into the restaurant well after 1400hrs, 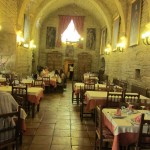 The restaurant in the monastery

they did not send us away. Excellent “menu del dia” though twice what we would normally pay for one, hey we are on holiday!!!!!
Straightforward way home though Christine was worried she would run out of petrol. This was followed by the usual dog walking, swim and showers.
Last full day here Friday, so plenty of relaxing swimming etc., etc., etc. Packing up ready for the off Saturday morning