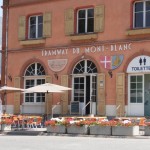 Having taken the dogs out, and left them with the air-conditioning on, we set off down to St.Gervais, where we were to catch our tram to the highest point we could go on Mont Blanc. Straight to the ticket office to purchase the tickets, to find the 11.40am was not running,  we would have to wait until 12.45pm, so having our tickets we decided to grab some lunch back at the campsite, walk the dogs again, and leave later. When we returned, there was quite a queue for the train, and we were thinking we would probably have to stand, but there was plenty of room for all. What a fascinating journey, slowly climbing up, the views were spectacular, and still 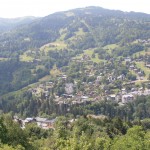 we kept climbing.  We stopped at several stops on route, then eventually stopped one stop before the end, 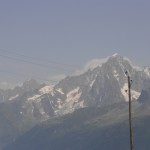 apparently they could not get right to the top, as they were doing repairs, which was a shame, because we wanted to see the glacier, we took some pictures from the top, and then caught the tram back.  The journey up to 2115m took 45 minutes, so the trip was well worth doing, but we were both disappointed 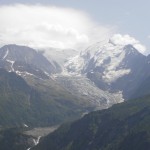 not to see more, perhaps if we come back, we will do it again.

Back to base, where Geoff cooked a barbecue, sausages and lamb chops, we had a lovely bottle of wine, plus some brandy. We played dominoes Jane’s way, which meant I was always had minus points, but it was funny, I then went to bed very light headed.