Friday 6th, and we arrived early evening at the White House Hotel on 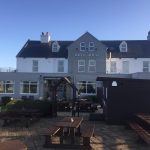 the top of the cliff above Whitby and were soon booked in, we even had 2 rooms to choose from.  Unusual you would think, well during the on-line booking process the connection broke and assumed the booking was lost so started again and got a confirmation; job done.   Well not quite, we had actually booked and paid for two rooms, hence our choice.   Fortunately the manager understood and our deposit for the second room was re-funded, we hope!!!!   Anyway after a shower and change, we went to the bar prior to dinner.   I enjoyed a nice beer whilst Christine had a dry day, but in the restaurant the food we enjoyed excellent.

Whitby is a seaside town in Yorkshire, split in two by the River Esk. 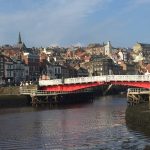 On the East Cliff, overlooking the North Sea is the ruined ,”Gothic, Whitby Abbey” and was Bram Stoker’s inspiration for “Dracula”.   Nearby is the Church of St. 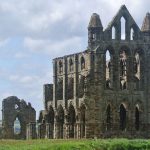 Mary, reached by 199 steps. (We didn’t climb them!!). There is the Captain Cook Memorial Museum in the town, this is in the house Cook once lived in and displays paintings and maps etc. West of the town is West Cliff Beach that is lined with beach huts, and at the top of this cliff is the White House Hotel.   Unfortunately we couldn’t gain access to the cook museum as it was closed in December.   The two halves of Whitby are joined by a swing bridge built in 1908, and is still in daily use.

After a comfortable night listening to the wind outside, we went down to breakfast and enjoyed a very nice  pair of “Jack the rippers”, 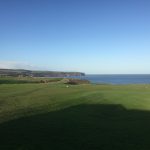 (kippers) overlooking a links golf course.  A few people were playing but they looked cold and windswept which probably accounted for their “skills” or perhaps a lack of them.  One thing did surprise us though was how calm the sea was with all this wind, but coming from the west may explain it.

After breakfast we headed out to Goathland, the village used for filming “Heartbeat” the program that ran from 1992 – 2010 set around rural life in Yorkshire during the ‘60s. 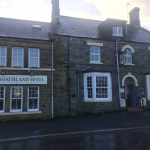 We drove all around the village spotting 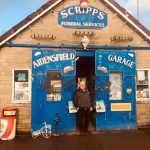 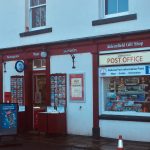 situated.    Again these are mainly gift/souvenir shops, but there was still a “real” post office, naturally closed today being Sunday, but we did manage to buy some stamps.  Next we headed down to Goathland (Aidensfield) station but it was all deserted.  The train 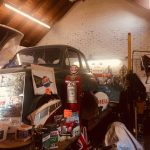 station is part of the “North Yorkshire 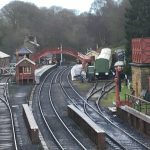 moors railway heritage line” that runs 24 miles from Whitby to Pickering, but being December, it’s not running.

So unable to explore anymore, we headed back to Whitby where we had a difficult time trying to park the car.   The car park had a machine that only took coins, which we didn’t have enough of or we could pay using the phone.  Unfortunately every time Christine was answering the automated voice and gave our registration, being Spanish, it wouldn’t accept it.  Does Whitby not 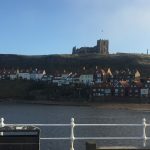 want visitors from another country that come by car?   I had to find a cash machine, then buy something to get 10 x £1 coins (very expensive to park here in Whitby)  to feed this machine, get a ticket and park, ugh!  Anyway after this ordeal we enjoyed wandering around Whitby’s narrow streets, harbour and quayside.  We were quite surprised how many people there were wandering about on a cold, windy but dry day, obviously a popular place to come. 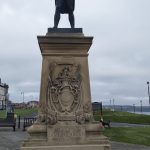 Captain James Cook, 1728-1779, the English explorer, navigator, and cartographer is famous for his voyages in the Pacific Ocean and his accurate mapping of it, together with his application of scientific methods to exploration.

Round two with superb kippers again to set us up for the day as we are heading to Scarborough, but the moment we set foot out of the hotel the wind hit 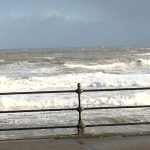 us.  Yesterday we thought it was windy but that was nothing compared to this morning and looking out to sea, well, it looked perfect for surfing.  This also explains why we didn’t see any golfers out on the course this morning.

Back into the town centre we parked and strolled up the main shopping pedestrianised street finishing up in a shopping centre built around a Debenhams store, this I think confirms it is a yesterday town.   I suspect the Victorians would turn over in their collective graves if they saw what had happened to their town and to add injury to insult, along the sea front there is wall to wall “kiss-me-quick” type shops and arcades.

“Fully dressed” we ventured out, nearly blown back through the door 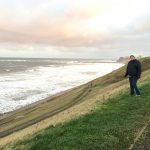 though, and headed towards the cliff, we decided to take the cliff walk to Whitby, a 20 minute walk, allegedly!  Arriving at the cliff top path we had a wonderful panoramic view of the North Sea and the continuous rollers pounding the beach and Whitby harbour 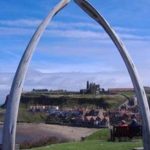 moles.   It was certainly bracing and we were surprised by the number of dog walkers also on the cliff walk, some of the dogs were small so it was a good job they had 4 legs to keep them steady!!!!   We wanted to walk at sea level but the number of steps was daunting so thought we’d jump onto the funicular that runs up and down the cliff but no, it was closed for the winter so we carried on with the cliff path.  As we approached the point above the harbour entrance we passed the statute of Captain Cook looking out to sea.  There is also a pair of whale bones forming an attractive arch placed here to recognise the town’s important whaling history.  The whale bone arch was erected originally on Whitby’s West Cliff in 1853, and the archway frames a view of the town’s quaint cottages and cobbled streets as well as the ruins of the medieval Whitby Abbey, located across the bay on the East Cliff.

Picking our way down numerous steps, along very narrow cobbled alleys and through a tunnel we arrived outside the fish market.   Our “adventure” had two purposes, one to get some exercise with fresh air into our lungs, and secondary to re-visit the restaurant we had enjoyed fish and chips yesterday.  Arriving outside the restaurant, shock and 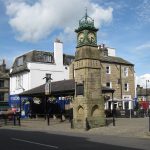 horror, they were closed for their “one day a year” major service of their fish frying equipment; we were devastated, all that unnecessary exercise getting there!!!!   Rather than walk back uphill, we jumped into a taxi having decided to eat back at the hotel.

Back in the room we endured another round of endless squabbles, un-truths and fantasising by 7 un-employable wannabe MP’s.  The more I listen to them, the more I realise why they want to be politicians, most of them would be un-employable in the real world.

After breakfast and a long chat with the hotel owners we left Whitby and headed to Micky and Ricky’s in Harden via Otley; still very windy but reasonably dry.   Otley’s en-route to Harden and was an ideal stop for a lunch, the other fascination of Otley is that the Police Station in the Heartbeat series was in fact Otley’s old Court House: the market square also featured in Heartbeat as well as DCI Banks and Emmerdale.

After a quick bite and walk about in the wind we headed to Harden arriving a few minutes before Ricky.  It was god to catch and have a chuckle about the going-ons and the deceptions etc., surrounding Christine’s birthday bash.

The evening started with a visit to the George”, a local pub / restaurant that does excellent food.  Next we headed to their local Conservative club for an evening of quizzing and Bingo meeting a few of their 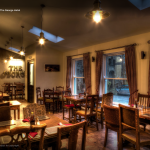 The George, another delicious meal

friends.   What a laugh we had, didn’t do to well with the quiz or Bingo but a very enjoyable evening,

Wednesday morning we had to be up early as they both have their factory to run, though Micky did cook some superb Cumberland sausages, not to mention bacon and mushrooms and we all indulged and enjoyed sausage baps with trimmings. Thank you both for a short but very enjoyable visit.   We then hit the road heading back to Derbyshire.