We woke and had a leisurely “cuppa” in bed before venturing out to a dry but chilly morning.  Our aim today was for Christine to have her nails done and me to go and visit the microbrewery, hopefully to enjoy several samples before buying.

We left the boat in the same place it was on Saturday, only facing the other way round, so knew our surroundings and especially the Whitworth’s factory, still working around the clock!!!!

After our meager breakfast we headed into town, first stopping at the museum en route for Christine to try and buy a fridge magnet, “failed”, then off to find a nail bar.  This we did with ease and Christine went straight in while I went straight to the local Costa, enjoyed a Bakewell Tart with my coffee and read the newspaper. Some considerable time later Christine re-joined me and after she had a cup of tea and yes a Bakewell Tart, we headed off to the brewery, which our Google map said was 20 minutes away.

This Microbrewery, called “Hart Family Brewers”, is in an old factory complex that has 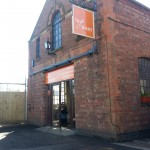 been turned into a boutique style shopping area with small, individual shops selling local products and unusual products plus arts and crafts etc., a rather pleasant environment, full of character.  Anyway, we arrived at the brewery only to find they only do sampling on Saturdays, in the week it is brewing and selling their products, oh dear.  What made things worse was we went there the Saturday before but we were too late and they were closed!!!!   The difficulty I now had was to decide which “ale” I should buy; they sold small 9 pint containers as well as bottles, but not being a bottle man it had to be a 9 pint job, but which one, that was the difficult question. 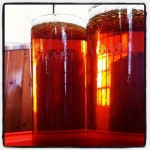 Anyway I bought their gold brew and on Sunday when Mark is with us, I am hoping he will help me drink it.

After our disappointment we headed back to the boat but not before we went into the Butchers shop selling the local meat and other local products.  We were both laden down, both shopping bags full and Christine’s ruck was also full; we had to stop for a rest half way!!!!

We sat, had a cup of tea with a piece of sharing cinnamon bun; we have only found this in Tesco and it is scrumptious, we love it

After dinner and as we had no TV, we started to watch a DVD but it wasn’t too good so we played crib again.; then off to bed as we were wanting to leave early tomorrow.