Well the day finally arrived when we collected “Pinky & Perky” (our scooters!) and the shop kindly loaded them onto our trailer, and then we were off. 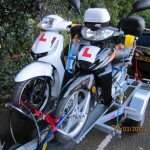 Bikes loaded and ready for the off

Next day we took the brave step and unloaded them and practiced around the Woodcroft (Andrew’s Hotel) car park and though the space was limited we managed figures of eight amongst other maneuvers to familarise ourselves with our new “toys”! 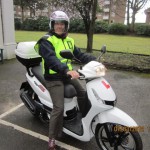 After a short amount of time Christine took it upon herself to drive “Pinky” to the local garage to fill up, unfortunately there was a problem.   Her problem was simple, she couldn’t manage to lift the seat and find the filler; back to the car park and after several false attempts, we managed to open it.  Back to the the garage to fill up, just under a gallon, wow! and back to the Hotel where I had still been practicing, including driving over the lawn.  It was either that or hit another car!!!!!!!!

We re-loaded the bikes onto the trailer as we decided to take them to the New Forest for some serious practicing but by the time we had them loaded and tied down it was nearly dark so had to abort, still there is always another day.